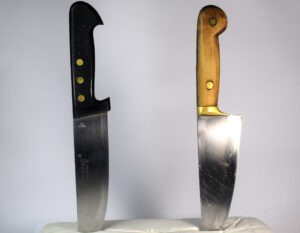 The knife on the left was obtained in a riverside market in Sambas, which is in Kalimantan Barat, Indonesia. It cost about a dollar. It was June 1987. I was there with a team from the U.S. Geological Survey to collect peat cores. We bought the knife to help in cutting the peat from the core as well as for a variety of other things. Having a knife is always handy. I didn’t expect it to last the expedition as it looked cheap and somewhat flimsy. I was wrong and it did last. At the end of the field work I stuck it in with the peat samples, which were shipped back to the USA. I was reacquainted with the knife sometime after that (a year or two) when I started to work on those peats as part of a post-doctoral position. Since no one really wanted it after that, I gave it a home and it has followed me around ever since. My wife has always been partial to it and goodness knows how many tomatoes, sandwiches and vegetables it has cut. The knife on the right was bought in an arts and craft store on the southwest side of Banks Peninsula, New Zealand in a small town called Little River. It was the early ‘00s. I love cooking knifes and am always on the look out for good ones; knifes that are durable and feel nice in the hand are a small vice of mine. This one was handmade by a local artist. There was another one in the shop that I really wanted because the handle had inset pieces of coal. It was beautiful. But the handle was just a bit too small and it didn’t feel right when held in my hand. The knife I did get, the one in the photograph, is by far my most favoured one of all my knives and I will have used it thousands of times on countless dinners, lunches and breakfasts.