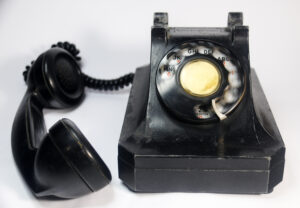 My Dad worked for the phone company all his life. Well … all his working life, but then some. He worked for Bell Telephone before World War II; before he joined the Marines at age 17. When he didn’t get killed and returned from the war, he went back to work for Bell Telephone, which was sometime in 1946. And he stayed there until the late 1980s. He decided to retire because all the systems were going ‘electronic’ and that was not really is forte. He made it to ‘Management Level 1’, where he stayed. He really didn’t want to go higher, he said, because he was a ‘hands-on, do-it guy, not a paper pusher’. We never used this phone in the photo but it sat on a shelf in our basement with other flotsam and jetsam of telephone equipment for decades. He once gave me one like it and made it work. I used it for a few years in the house I used to live in at College Park. That one was lost when I loaned it to my best friend when I went overseas to live. When he split with his wife she ditched it. A shame. So I liberated this other one from Dad’s house many years ago and it has followed me around too. It reminds me of Dad and also how the world used to communicate; the phone as an instrument really didn’t change for decades and decades but now I don’t even own one; only a tiny computer that acts like a phone that I carry around in my pocket like a little teddy bear of security.