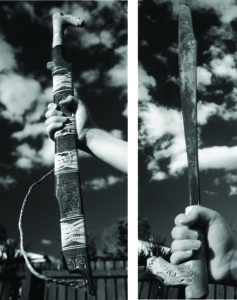 The word for machete in Bahasa Indonesia is parang. The one in the photograph was hand made for me while in Kalimantan Selatan (Borneo), Indonesia in 1986. It was my first visit to a land I would come back to across many decades. I was there with my fellow graduate student Joan Esterle as we were investigating how the organic-rich sediments formed in this part of the world. At some point our fellow Javanese geologist Sonny Pengestu suggested we get a parang, locally made in one of the nearby villages. So, one day he took us over to the village; very basic houses but absolutely clean and tidy inside. We sat down, talked with the chief of the kampung, ate some wonderful papaya, and discussed what we wanted. I was happy for anything, as it was all an adventure. I think it was explained that the steel of the blade would come from an old car spring (recycling!) and the wood from local trees. “Come back in a week”, he said. And we did. I’ve had this really sturdy, well-honed and nicely sharp parang through many travels. It is not something that is especially rare, but it is particularly special to me. Perhaps one day my son Micah (who is holding it in the photograph) will use it in one of his adventures.