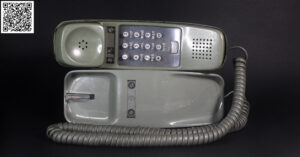 A touch-tone phone – wow. Seriously, I mean WOW! That’s a ‘wow’ in all caps and double bold! I can still remember my excitement when Dad brought the first one home. I think we had one long before most of our neighbours because Dad worked for the telephone company, of course. I can’t overstate just how big of a technology jump we thought we had just made. I mean: previously for as long as my memory had existed there were only dials on phones (except in those old time movies where everyone went through a switch board). It blew my mind that it was the combination of those sounds, which found the caller on the other side. We had this type of phone on the wall just by the kitchen in my parent’s house. The headset was attached to the main body by a springy line, like the one in the photograph. However the one we used was very long so my Mom could cook and talk on the telephone at the same time. To us, this was a mobile phone.