Internationally refereed articles on coalbed methane in Indonesia are rare.

However, an article addressing heat flow effects on a coalbed methane reservoir in East Kalimantan, Indonesia has recently been published*.

You may well ask, so what? Indeed a good question; here is the context.

There are many of us who have been sitting at the edge of our seats, waiting for Indonesia to truly begin coalbed methane (CBM) development. Although the resource potential has been known for a long time, there has been little action.

I was contacted as long ago as 1996 by the Ministry of Energy and Mineral Resources looking for overseas examples of regulations on CBM. Later, there was the Rambutan CBM Pilot, drilled by Lemigas and Medco Energy in South Sumatra in the early 2000s. More recently the first Production Sharing Contracts (PSCs) for CBM were awarded in 2008. 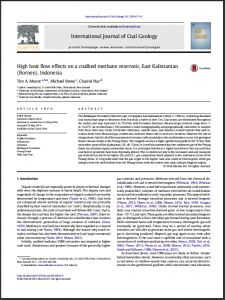 And yet, there is still no commercial CBM projects delivering gas to the market at the time of the posting of this blog.

Having said that, VICO, a BP/ENI jointly owned oil and gas company working primarily in East Kalimantan, is furthest along. They have accessed methane from the coal mostly through re-completing existing O&G wells within their existing PSC.

The rest of the activity in CBM is confined to exploration core wells and pilots by a variety of larger to smaller sized companies. Exxon Mobil did a fairly large effort in the Barito Basin a couple of years ago; NuEnergy, Dart Energy and Santos are also exploring and conducting pilots, and locally owned companies like Ephindo Energy and Sugico have also had some excellent successes in defining resources and reserves.

However, there is precious little information on CBM systems in Indonesia assessable to investors and government regulators. But a joint effort between industry, government and academia has resulted in a paper being published within a premier international journal (International Journal of Coal Geology). The authors are myself, Michael Bowe (Ephindo Energy Ltd.), and Professor Chairul Nas (Trisakti University, Jakarta).

The paper outlines the basics of the reservoir character and the possible effects of higher heat flow in the vicinity of the geological feature known as the ‘Pinang Dome’. I’ll leave you to read the paper but hopefully this is just the first step in understanding the coal seam gas systems in Indonesia a head of development and production.