Two geologists walk into a bar. The first orders a ‘Flaming Volcano’ (he’s a neo-tectonics/Quaternary guy). Without blinking an eye the bartender asks him what sort of rum he’d like. The second geologist orders a ‘Black Coal’ Stout (she is an organic petrologist). Everyone in the bar freezes then slowly slinks out the door ….

Though slightly exaggerated, this is sometimes the reaction when you say you study coal. I have learned, however, to be more precise and start out by saying I study organics within the geological cycle. 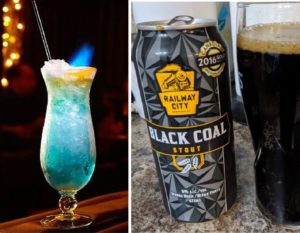 What I have noticed over my geological career (which, spanning 40 yrs, is longer and more varied than most of my colleagues) is a change in perception of the role of organic material in understanding the world we live in. Let me give you an example, without naming names.

A colleague of mine studies organics in all their forms: solid, liquid and gaseous as well as when organics are minor components of any particular geological stratum. Yes, there have been many applied studies, but equally he has used organics to interpret the geological past, such as palaeoclimate, depositional systems, and catastrophic events among other things.

Yet, he is often accused or being beholden to big oil, or to use another common dog-whistle word ‘King Coal’. Either these people are purposely being thick or are pushing some agenda. Either way, it is extremely short sighted and wrong. 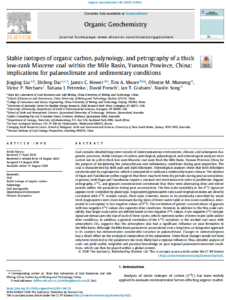 Which brings me to this new paper, just published in Organic Geochemistry*. It looks at a thick, Miocene-age coal in southwest China from the perspective of a non-marine, continentally placed, 15 million year old mire. A mire that was around for a very long time. Organics are incredibly sensitive to slight changes in temperature. Most of us know that this is a really useful attribute to tell how deep and what thermal events happened to that stratum.

But organics are also sensitive to the depositional environment that they formed within. They tell us about the type of plants, the amount of precipitation, the number of fires, the level of oxygen in the atmosphere, and more. And, as this paper points out, all those influences are not just restricted to the area of the palaeomire, the information gathered from the coal will have regional implications.

As the final sentence in the abstract by Liu et al. (2020) says “…detailed analysis of coals can yield useful, insightful and practical knowledge on past regional palaeoenvironmental conditions, which can then be placed within a global context”. 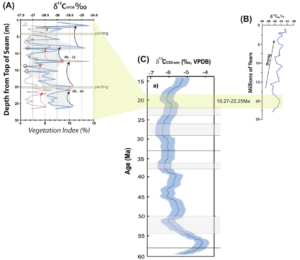 There is photograph I often show in my lectures to undergraduate students (and others). It shows Cretaceous age sediments and coal in part of the over-thrust belt near Kemmerer, Wyoming (USA). Within the photo there are beautiful foreset beds (crevasse splays?) each pinching out over top of each other and slightly off set. Underlying these is a 10 m+ coal with clearly visible vertical differences. Yet, as I say, a sedimentologist would describe the 50 m overlying sediments down to cm scale but upon reaching the coal would lump it merely as ’10 m coal’. These ‘Heads of Schools’ sedimentologists would be getting a D- from any self respecting field geologist truly interested in understanding that geological framework.

A final tip to all those who seem to be on the bandwagon to expunge the study of organics, merely for its association with fossil fuels: don’t, as they say, throw the baby out with the bathwater; you will loose capability and ultimately disadvantage your students and staff. You will loose an important cipher to Earth’s past.