by tim on January 25, 2019 in Education, News, Uncategorized

As we travelled between Katowice and Krakow, the Polish translator switched effortlessly back and forth between English, Chinese and her native language. I can vouch that her English was impeccable and can only guess that her Chinese was too, based on the intensity of the exchange and the frequency of the erupting laughter. I confess that I’ve always been in awe of people who are multilingual – such as my wife – as it is only through knowing a region’s language can we ever have even one iota of hope in understanding it’s culture. Long ago my good friend Carlos Galceran told me a joke (he’s originally from Cuba and thus bilingual): if you know three languages you’re trilingual, if you know two languages, you are bilingual, if you know one language you are American. Though I’m less of an American these days, I did start out that way. 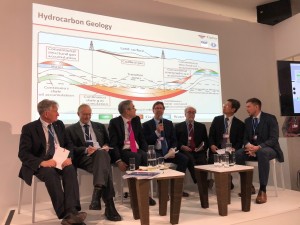 Tim Moore (fourth from left) on Methane for a Green Economy panel at COP24, Poland, December 2018

The COP24 climate meeting (December 2018), hosted by the United Nations, which was my excuse to be in Poland in winter, was indeed a multilingual event. The meeting was a beautiful kaleidoscope of people, colours, sounds, opinions, perspectives, shapes and sizes. I’m not sure why, but being in such a setting always fills me with joy. Like when I was a child and I would look up at the vast universe of stars and feel awed; a wave of serenity would wash over me giving me, for lack of a better word, peace. Far from any sort of a religious experience, it is what inspired me to become a scientist.

I had been invited to be on a panel by PGNiG, the national Polish Gas Company who was one of the major sponsors for the conference. The topic was how to use methane as a transition gas from fossil fuels to an energy economy less dominated by carbon (Panel title: “Conventional and Unconventional Gas as a Destination Fuel for the Green Economy”). My task was to report on and discuss coalbed methane and fugitive emissions from that activity. My other panel members were Scott Foster (UNECE Director of Sustainable Energy Division), Piotr Woźniak (CEO, PGNiG), Raymond Pilcher (Chair, UNECE Group of Experts on Coal Mine Methane), Olaf Martins (International Association of Oil & Gas Producers), Torstein Indrebo, Vice Chair, UNECE Group of Experts on Gas) and Jin Zhixin (International Centre of Excellence on Coal Mine Methane in China). There were indeed many voices, but voices that coalesced into a common cause – making an energy transformation from carbon-rich to carbon deplete in a sensible, reasonable expedited manner.