Cipher has been engaged to oversee the evaluation of gas in coal in an area near the town of Tete, Mozambique. An extensive drilling program is being undertaken to characterize the coal and organic sediments for gas content within the Moatize Formation (Permian).  The coal-bearing formation is upwards of 800 m thick in some places with net coal greater than 90 m. Individual seams can be more than 30 m in thickness. 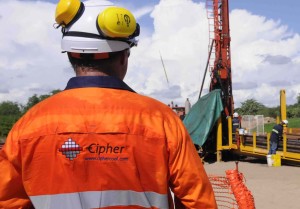 The Moatize Formation is part of the greater Kalihari-Karoo coal basin that occurs through out southern Africa (Cairncross, 2001; Catuneanu et al., 2005; Hancox and Götz, 2014; Johnson et al., 1996; Wagner et al., 2018). Like much of the Permian in southern Africa, the stratigraphy is made more complex by the presence of abundant dykes and sills (Le Gall et al., 2005).

In December 2018 Cipher conducted on-site training and drilling has since commenced. Extensive data from a number of locations will collect gas charge, gas potential and gas quality data. Cipher will then use these results to estimate original gas in-place volumes.

← Balal
Fire and Brimstone in the Cretaceous →