Dr Tim A. Moore (Cipher) and Dr Joan S. Esterle (School of Earth Science, University of Queensland) were invited to give a workshop by a major coalbed methane (CBM) explorer in Indonesia last week. There were a total of 11 participants, including one from BPMigas (the Indonesian government regulating body for petroleum exploration). 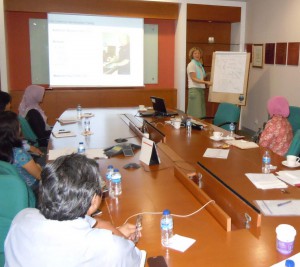 The course focused on both the broad aspects of coal as well as the very specific sampling and analysis needed during CBM exploration. In order to understand coal, you have to understand how it forms and that means having a firm comprehension of how, why and where peat forms. Both Joan and Tim are experts in peat formation; between them they have studied mire formation in Indonesia, Malaysia, New Zealand, Alaska, and Russia among other places (see below for four of many publications Joan and Tim have done on peat over the years). Every attribute that makes coal behave the way it behaves has its genesis in the original peat forming mire.

Understanding the influence that the original peat types have on resultant coal properties has allowed Joan and Tim to speculate on why some CBM reservoirs behave in the way they behave. In the workshop, CBM attributes such as saturation, maximum gas holding capacity, gas generation and type (biogenic vs thermogenic), gas domains and permeability were all examined and discussed. Finally, Indonesian coal properties and the implications for gas and reservoir deliverability were discussed.