by tim on December 1, 2017 in Education, News, University

“I’m sorry sir, but that flight is fully booked and there are no more today”, said the man behind the counter at the Bogotá airport. It was 5:30am and sleep was still making an armed assault on my eyes.

The day before, our 2pm flight had been changed to 7am without explanation and now they were saying the new flight was full. It was hard not to let out an audible groan – an on time return to home wasn’t looking likely.

“But instead of flying to Santiago, we can fly you to San Salvador and then on to LA and THEN on to Australia, Sir”, our friendly airline agent said, with an ever cheerful smile. 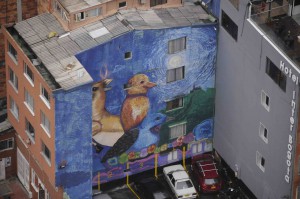 After 30 minutes of gentle but persistent probing it looked like we were heading for the US; until, that is, my traveling companion, Prof Neil McIntyre of University of Queensland, pondered out loud that he’d need a visa. I mentioned this to our friendly agent – in a slightly louder and more forceful way – and he finally looked a little concerned as he once again ventured out from behind the counter to consult with his supervisor. This time, however, he returned with the supervisor who, after spending about 5 minutes pecking away at the computer keys, miraculously found us two choice seats on the 7am flight to Santiago. We were back on schedule.

Before the early morning airport boondoggle I had spent the last 5 days (8 – 12 October) in Bogotá at the invitation of Prof McIntyre and the University of Queensland (UQ), in support of negotiating an initiative to

set up a centre of excellence for sustainable mining in Colombia. The government of Colombia had requested that UQ, specifically the Sustainable Mining Institute (SMI) at UQ, help to create such an centre. Over the previous year some projects had already started and networks developed. From this visit it was obvious that some real progress was being made; the Colombia Mining Association was keen to start funding specific projects and a consortium of universities looks imminent to form in support of the centre of excellence.

There is still much work to be done to get the centre up and going, but it is an enviable endeavor and one that is overdue. I’d gladly return to help, even including early morning airport negotiations!