Flotsam and Jetsam of the Digital Age

I just couldn’t let it go. Even after 27 years I still looked. Not continuously of course, but whenever I discovered a book that I’d had for a long time but not opened in a while I’d turn it upside down and riffle its pages to encourage anything jammed in there to fall out. Or if I was rifling through a box of old papers or data in search of something else, I’d fan them open like a deck of cards to see if there was anything other than plain paper stuck in there.

One particular cardboard box, which I still have, contains geophysical logs of the eastern Powder River Basin (Wyoming, USA) and even though I’ve sorted through them many times, I still return to that box – if I happened to see it – just to double check if it contains this missing item. In my foggy memory I still harbor a feeling I had stuck this thing in there, comfortable in the fact that a large stack of papers would keep it flat.

I never have found it. That is, until today.

I was in Jakarta on a highway, stuck in the inevitable ‘macet’ (traffic jam). No, that isn’t technically where I found it. It just happened to wash up on my iPhone during a Google search.

Let me back-track a little. Just after finishing my PhD in 1990 at the University of Kentucky I had gone back to Lexington for a quick visit (I was then living in Alexandria, Virginia, on a post-doctoral position at the U.S. Geological Survey in Reston). While in Lexington a photograph had been taken by the university’s promotional arm of myself, my advisor John Ferm and his long-time research assistant Jerry Weisenfluh. 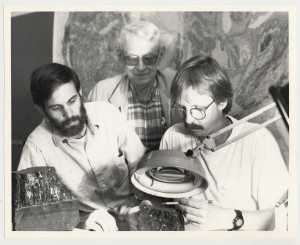 I had duly been given an 8×10 inch hard copy (this being prior to all things digital). I was able to hold on to this photo for a few years, keeping track of it even through moves to and from New Zealand. But it was during the move back to New Zealand in 1994 from Laramie, Wyoming that I had put the photo in such a safe place that I could never ever find it again.

It was today that a former classmate at the University of Kentucky had contacted me on email about something. While stuck in a macet I thought I’d Google something related to what he was asking for; in the banner of photographs that often accompanies those searches I spotted the thumbnail of my long lost photograph.

I was amazed and gasped, saying to my wife ‘There it is’! She thought I saw something out the window of interest until I showed her the image on the phone. She passed it to our 6 yr old son who dryly noted ‘yeah, that’s you; your skinny there’, before calmly passing the phone back to me, apparently unimpressed.

So, who would have known that this piece of my past, one that I had sought after all these years would wash up on my digital shoreline in the middle of Java on a lazy Sunday afternoon some 23 years after being misplaced. The internet, after all, isn’t all bad.