My son asked me what scores of other children ask their parents at some point: “Dad, have you ever been on TV”?

I was in the middle of painting a wall inside the house and was poised to say no… no, sorry son, I have not, when I realized I actually have. So instead I said – half bemused that I even remembered myself – yes, yes I have son, but not on a TV station in a country where I actually lived.

Back in 1996 one of the BBC channels were doing a science series on palaeoclimate and the presenter of this episode, Dr Bill Spicer from the Open University in London, was in New Zealand. He was talking about the Cretaceous and filming as he went. As it turned out I had worked both in the Cretaceous coals in New Zealand and studied peats in the modern environment so I was asked to give some on-air comments. 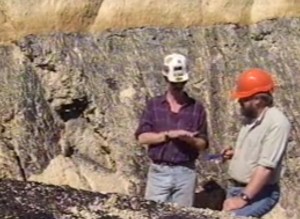 It was only a small part but set in the Kaitangata coal mine, on the southeast coast of the South Island. When I remember I had been in this I said to my son I’d go find the DVD. But all I could find was an old video of it and not having any video players I was stuck. My son’s excitement at seeing his Dad on TV was starting to turn sour.

Then I thought perhaps, with all the other stuff floating around out there, it might just be somewhere on the internet.

And there it was.

If you follow this link: https://www.youtube.com/watch?v=qxCiyWo3D2Yand go about 12 minutes into the episode, there I am. Well, there is the 1996 edition of me at least. My son had me play it several times looking and listening carefully. He is still dubious about whether it is me or not.

The web is a strange timeless sea. Once again, it is hard to predict just want might wash up next.