Bangers and Mash with a good dash of Pickel

The fantastic thing about geology is that it is the perfect mix of both science and imagination. There is that old saying of Einstein about imagination* and geologists, on a daily basis, have to exercise that muscle. But it is the shear scale that geological imagination has to transgress – from continents to subatomic particles – which is amazing. Often a study spans the entire spectrum in one swoop. And then there is the time factor, the fourth dimension**. It is indeed a grand occupation.

In order to help make sense of our geological world, geologists often use models. Or more precisely they construct models based on all available data, which in most cases are few. These models, almost exclusively, these days, are 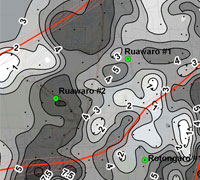 derived from the outputs of computers. They can be as simple as stick and line correlations with minimum extrapolation, or be more complex, imagining contours of bed shape and size.

In complex stratigraphic intervals there is increasingly the use of ‘cells’ of various resolutions both vertically and laterally and then these cells are filled with the interpolations and extrapolations of stratigraphic properties. While this methodology is attractive to use and can produce strikingly believable maps it is recognized they do not represent reality. They capture the ‘feeling’ of the amount of variability that may be encountered but they are not quantitative and still do not show where correlations away from data are more or less certain.

Some methods are being developed that do use probabilistic analysis in multiple runs that address the uncertainty of stratigraphic properties. In terms of exploration programs and the reliance we place on these models, knowing the uncertainty of areas is hugely important.

The issue with all geological models, however, is that the further away we get from the base, real data, the more we inhabit fantasyland. Imagination is truly important in geology (as in all science) but when making multimillion-dollar decisions on where to drill or start a mine it is also best to remember where reality lies – that is, the data. 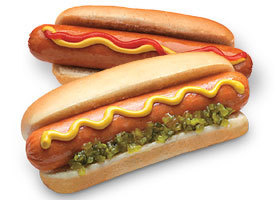 A type of sausage with pickel (image from: https://couponcravings.com/meijer-4-packs-of-oscar-mayer-hot-dogs-1-pack-of-buns-for-1/)

As Dr Walter Pickel says “Geological models are like sausages, you like them until you know what’s in them”. And Dr Pickel knows a thing or two about geology and sausages.

** “With their four-dimensional minds, and in their interdisciplinary ultra verbal way, geologists can wiggle out of almost anything”– John McPhee, Annals of the Former World, p. 611