It was an early morning start and the topical air of South Kalimantan (Borneo) already hung heavy and thick. We boarded the wooden powerboat that was more than just a little tippy. It held a party of six, which consisted of colleagues Joan Esterle, Sonny Pangestu, Hermes Panggabean plus Pak Juwady, our pilot, and a young assistant pilot. Our target was an hour’s journey to Tanjung Dewa (‘Cape God’) and a beach outcrop of cross bedded, fluvial sandstone of the Eocene age Tanjung Formation. 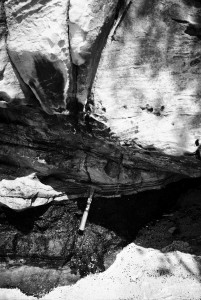 I was in Kalimantan to study the Late Eocene coals that occur in the Tanjung Formation but in order to fully understand their formation I also needed to understand how the contemporaneous sediments adjacent, underlying and overlying were also formed. We had already seen a few examples of the sandstone units underlying the main coal horizon but this seemed like a good opportunity to combine both geology and a beach excursion.

Finding our objective was not hard and we were rewarded with sunny skies, a fantastic outcrop and a lazy, laid-back lunch under palm trees fresh with coconut milk and meat. The rub, as it is often said, came when it was time to leave.

Having spent our time on the north side of Tanjung Dewa, we then tramped south over the promontory to a little in-let where we saw our small boat grounded some 100 m out from us in tide waters which had not yet quite risen enough to float it. After an hour and a few more fresh coconuts we waded then swam to our boat. It was now truly afloat and it was time to head back up the tidal channel to our camp. But the first clue that things might get a bit harry was that all the Indonesians were putting on life-preservers. We hadn’t even seen the floatation devices on the way there and now suddenly they materialized. Luckily there were enough for everyone so Joan and I donned ours without question.

Within minutes we pulled the ties on the life vests even tighter. In the late afternoon the winds had picked up and since Tanjung Dewa jutted out just a bit into the open Makassar Straits the waves were not insubstantial. It soon became apparent that our little boat was going to struggle through those waves; waves that were turning white and breaking with an ever increasing frequency.  I noted with new clarity just how low our gunnels were to the sea. Why had this fact escaped me before? 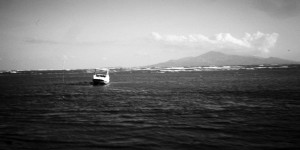 Sitting under the canopy that was open on all sides we watched as Pak Juwady struggled to keep the engine going; most worryingly it was on the brink of flooding out several times. I wasn’t sure this was a battle our boat and pilot were going to win. At one point it did cut out completely. I watched the waves breaking on the rocky cape that now seemed way too close for comfort. To vociferous cheers our pilot got the engine started again and we battled on. About this time Joan and I noticed that our fellow geologist Hermes was nowhere to be seen. A quick glance around and Pak Juwady indicated that Hermes was sitting on the roof above our heads. He later explained that he had been in a similar situation in Papua the year before and some of his crew nearly died because they were trapped inside when the boat capsized. I couldn’t help but grimace. 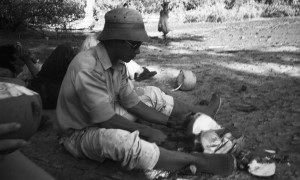 Sonny Pangestu opening coconuts while we wait on the south side of Tanjung Dewa for the tide to come in.

It seemed like we were rounding Tanjung Dewa for hours but in actual fact it was probably less than 10 minutes. That evening the gods were kind and let our small craft pass unharmed. The waves subsided almost in an instant once we were in the lee of a small island that guarded the entrance to the estuary. By then it was nearly dark and we had joined our friend Hermes above. With absolutely no lights around the Milky Way was like a celestial highway, magically sugared with a billion points of light. For a long while we were silent and still. Then, almost as if on cue, a large meteor streaked through the sky. It seemed to be within a few hundred meters, though of course it would have been much further away. It was so bright that it drowned out the stars and we could clearly see the encroaching mangroves that lined the sides of the estuary, funnel-like as we motored further and further in-land. 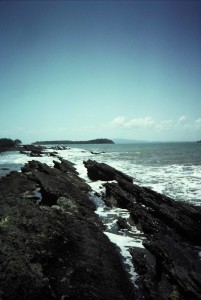 Dipping strata of the Tanjung Formation (Eocene); looking north from Tanjung Dewa, Kalimantan Selatan towards the mouth of Kelumpang Bay (Approximate position photo was taken from is -3.114021º/116.269175º)

That was August 1986 and 31 years later I was passing Tanjung Dewa once again in a substantially larger boat at substantially faster speed. This time my geological colleagues Mike Friederich, Hendra Amijaya and Ferian Anggara and I were on a mission to find samples of rock to solve an enduring mystery that had stayed with me all those years. In Part II of this blog, I’ll explain what that mystery was and how we planned to address it.

← Flotsam and Jetsam of the Digital Age
NEW PAPER: Resources and Geology of Coalbed Methane in China: A Review →