by tim on October 19, 2015 in Commercial, Education, News, Uncategorized, University

We sped across the surface of Lake Semayang with the bottom only inches below us. Using traditional long boats – with light but powerful engines – twenty-seven of us were headed for Semayang village, on the north central ‘coast’ of the lake. We were there as part of a geological field trip examining modern environments that are analogous to coal and organic-rich shale rocks. The previous day we had visited the Mahakam delta, which is the yang to the lake’s yin (Moore, 2015). 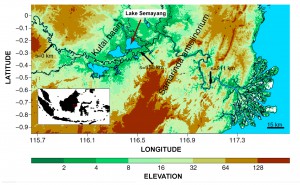 In the pre-run of the field trip in June the whole of Lake Semayang was filled with open water. It was impressive. Just as impressive was how much the water had dropped in just three and a half months. Staggering. It is clear how much those lakes require the ‘ever-wet’, equatorial climate. Also clear is how they act as a water catchment, a natural basin which prevents flooding down stream.

It is thought that the Kutai Lakes area is subsiding and act as a huge trap for large volumes of sediment; the rest is entrained in the Mahakam River and travels the remaining ~200 km (as the river meanders) to the Makassar Strait where its deposited in the delta complex. Although the Mahakam River is meandering east of the lake area, the meanders are not sediment-load and gradient controlled; rather it is the geology it is following causing those bends (the hills and lowlands of the Samarinda Anticlinorium).

Speeding along in a long boat on Lake Semayang. Vera Korasidis and Matilda O’Connor (both from Melbourne University, Australia) enjoy the breeze.

More about the delta and the ancient environments my next blog!