The morning was smoky and hazy as we made our way to the docks from the hotel. A forecasted El Niño year was already being felt in East Kalimantan (Borneo) as evidenced by the fires through out the region. Still, we were all looking forward to going out on the infamous (at least in geological circles) Mahakam Delta.

Our host and teacher for the day was Dr Andang Bachtiar of the National Energy Council in Jakarta, Indonesia. Pak Andang is a very well known geologist in Indonesia, SE Asia and, well… really, the world. He conducts multi- 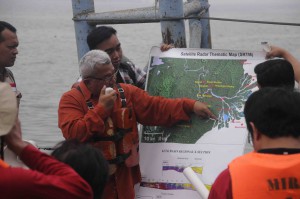 Dr Andang Bachtiar at the start of the field trip summarising what we’ll see.

day field trips on the delta a few times a year. We were fortunate enough that Pak Andang found a spare day to take us all out.

We had four stops and three speed boats and 8 hrs of day light to cover 130 km. The first stop was ‘head of passes’ where the main part of the Mahakam River starts to bifurcate into a classic delta form. We did an echo sounding at that stop and some bottom sediment sampling. Nothing like catching some fresh data to feed on in the tropical sun.

Because of the tides, we then rushed out to our second stop (or Stop 4 in the field trip guide; see reference Moore (2015) in the previous blog), which is about 6-8 km off shore from the tip of the delta. We were visiting a distributary mouth bar and the only time to catch that show was at low tide. After we landed in what seemed like the middle of the ocean, we only had about 40 mins before the tide started to come back in so we examined the bar material and Pak Andang’s crew took a ~2 m core which we examined later at lunch time.

At lunchtime we pulled over at one of the many shrimp farms within the delta where a small family welcomed us.

On the distributary mouth bar; TSOP participants head back to the boat before high tide sets in.

There we got out of the sun, ate our lunch and cut open the core. What a sight: lovely sand, mud and carbonaceous material and between Pak Andang and the rest of the participants we pieced together a sedimentological story. It probably wasn’t right, but, as is the goal in geology, it was at least consistent with the evidence we saw.

The last two stops were at Pulau Datu and Muara Bayur, both on the lower delta plain. Echo soundings were made and sediment samples collected to make a cross section of the Mahakam River at those points. At each of the sites, too, we did salinity tests and it was abundantly clear that the river remains fairly fresh right up until the sea. 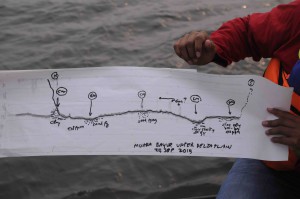 The delta is an amazing place and a perfect modern geological laboratory. You can’t cover it in a short day – not even in a long day! It would takes weeks and then true understanding would then take years.

The delta itself feels like a living, breathing exceptional being all on its own. We only made the barest of scratches on its surface; hardly a one-dimensional spot of learning. But still, we were satisfied though I’d guess most of would still want to know more about the 4-dimensional (left-right, front-back, up-down + time) nature of this wonderful serpent of a river.

In the next blog, we’ll go back 15 million years to see what the ancestral Mahakam delta and river complex looked like. Stay tuned! 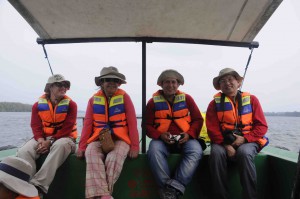 ← Geological Time Travel in East Kalimantan (Borneo): Part I – Fresh Water Lakes
WHY DOES INDONESIA HAVE SO MUCH COAL? – NEW PAPER OUT IN INTERNATIONAL JOURNAL OF COAL GEOLOGY →