How Many Holes Does It Take to Fill the Albert Hall?

It would not be untrue, though perhaps unwise, to say to a burly coal miner ‘your coal is full of holes’. Indeed, a fundamental property which makes coal such a special and unique material – and has implications for coal properties ranging from not just methane holding capacity but also activated carbon and liquefaction – are these ‘holes’, or pores as they are more professionally referred to. 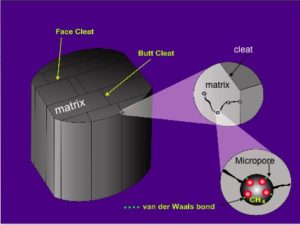 Fracture system in coal and relation to pores.

It is generally accepted that there are two key parts to the porosity system in coal: large fractures and much smaller pores (Clarkson and Bustin, 1999; Harpalani and Chen, 1997; Rodrigues and Lemos de Sousa, 2002; Cui et al., 2004). Within the smaller pore system it is recognised that three size classes of pore may exist (Şenel et al., 2001; Gan et al., 1972):

Interestingly, Yao et al. (2008) report that pores may follow a fractal distribution, being primarily influenced by the presence of natural surface area irregularities such as original plant pores and mineral matter. It has been argued that the size distribution of pores is even more complex than a ‘simple’ bi- or trimodal distribution with porosity being influenced by a range of types and sizes of micro-fractures (Gamson et al., 1996; Li et al., 2003). Understanding the “dual porosity” system is important because it is core to understanding gas desorption and flow.

Diffusion of gas through the matrix from pore to pore is a process we see everyday, e.g. when you smell perfume.

It is well established that micropore volumes are associated with coals with high vitrinite content (Unsworth et al., 1989; Clarkson and Bustin, 1996; Bustin and Clarkson, 1998).  Within an isorank series, Chalmers and Bustin (2007) found that bright lithotypes (i.e. vitrinite -rich) in Australian coals generally had greater pore volume than dull coals. Specifically they cite a positive correlation between the maceral telovitrinite and the volume of micropores. In contrast, in a study of New Zealand Eocene age coals, Mares et al. (2009) cite a negative correlation between telovitrinite and macroporosity. Chalmers and Bustin (2007) found that ‘reactive’ inertinite had similar pore architecture to vitrinite and thus similar methane holding potential. Coals with higher non-reactive inertinite have a greater abundance of macro- and mesoporosity as opposed to microporosity (Lamberson and Bustin, 1993; Clarkson and Bustin, 1996; Adeboye and Bustin, 2011). Interestingly, Chalmers and Bustin (2007) also found that in liptinite-rich coals (e.g. ‘boghead’ coals) methane is held as solution gas within the pores as opposed to being adsorbed on pore surfaces. This is an example of a depositional environment, albeit at one end of the depositional system spectrum, influencing pore type distribution in a CBM reservoir. Zhang et al. (2010) has also cite a correlation between micropore distribution and coal facies, though more work on this needs to be conducted.

Finally, lets return to the title question: how many holes does it take to fill the Albert Hall? I will admit this has been a conceit to get the reader to think about holes in a real-world setting (as 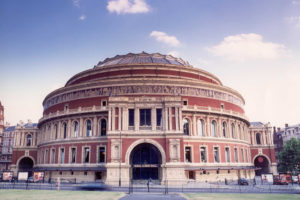 The Royal Albert Hall: it can hold a lot holes!

opposed to the sometimes-hard-to-envision environment of a reservoir). The real question, as it relates to coal, should not be ‘how many’ but what size. As is obvious – and I’m sure that the Beatles were aware of this when they wrote this line in their song “A Day in the Life” – the question can have an infinite number of answers: one big hole could fill the Albert Hall or an infinitely small number of holes could also do the job. However, if we were looking for holes (read these as ‘pores’) to ‘fill’ a coal, we’d be looking for the smaller versions in order to maximize the surface area for gas adsorption.

Gu, F., Chalaturnyk, R.J., 2006. Numerical simulation of stress and strain due to gas sorption/desorption and their effects on in situ permeability of coalbeds. Journal of Canadian Petroleum Technology, 45: 1-11.

Gürdal, G., Yalçin, M.N., 2001. Pore volume and surface area of the Carboniferous coals from the Zonguldak basin (NW Turkey) and their variations with rank and maceral composition. International Journal of Coal Geology, 48: 133-144.

[this blog is an abridged version of: Moore, T. A., 2012, How many holes does it take to fill the Albert Hall? The importance of porosity in a coalbed methane reservoir: 36th Annual Convention & Exhibition, Indonesian Petroleum Association, Not paginated]