More than seldom I get asked by random people; some curious how a scientist starts out (and stays) being a scientist, others almost incredulous that they are actually meeting someone who works in coal – the implication being I must have been duped.

Like most people who end up in a career they love, its almost as if the career chooses you. However, as a kid I wanted to be a meteorologist. My Dad even built me a regulation size, freestanding, weather box where I put my thermometers and each morning and evening I’d record the weather. My Dad had made an electronic weather vane that told us the direction of the wind from the comfort of our kitchen. There was also a wind speed indicator and during storms we’d all gather and watch the gusts go into the red ‘danger’ area yell ‘hurrah’!. It was fantastic fun.

So it seemed normal that when an early placement person came to our high school from the University of Maryland I choose meteorology as a major. Except I didn’t.

There was no undergraduate program at UM for meteorology and thus I could not sign up. Well, not unless I choose a different major.

So, on the spot at the age of 17, I choose geology (see also: https://www.ciphercoal.com/babel-redux-balal/) ; a choice I made without regret, both then and now. As it turned out, meteorology is very math intensive, and although I am inclined to quantitative analyses, higher math is not my strong suit. 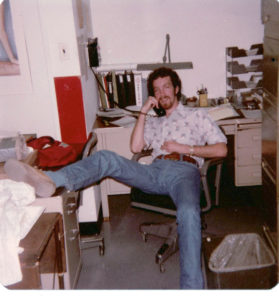 After a couple of years of undergraduate study in geology, one of my classmates noted a sign on the bulletin board for part-time jobs at the U.S. Geological Survey. I already had a part-time job doing shift work at the university as a radio operator for the maintenance department, but a job in my field sounded much more appealing.

I spent an enjoyable morning at the USGS getting interviewed by various scientists who were looking for student help. I think I had three interviews and then a nice Human Resources lady informed me that I’d be working with a fellow in the Branch of Cold Resources.

I couldn’t quite figure out what a Branch of Cold Resources would study but I thought it must have something to do with glaciers, which sounded cool.

But while I was being shown around it suddenly dawned on me that it was not Cold Resources but Coal Resources. Being open and impressionable and 19 I thought “that sounds cool too”.

The following week I started working in the coal petrography lab of Ron Stanton. My first geological colleague was Derek Widmayer and together we ground coal, polished pellets and sang ‘I’m a Coal Man’ to the tune of The Blue’s Brothers “I’m a Soul Man”. We had a blast, and it would only continue to get better.

← Field Work in the Senakin Peninsula: Part III – NEW PAPER
How Many Holes Does It Take to Fill the Albert Hall? →