When someone says ‘hydrogen’, what do you think of?

I wasn’t sure why I thought that until I looked up the range at which hydrogen can explode compared to methane. And indeed hydrogen is more flammable.

Methane’s range of concentration in which it can explode is between 5 and 15% (so lower than 5% methane will not combust; higher than 15% it will also not combust because it lacks enough oxygen to create a flame), whereas hydrogen has a flammability range of 4 to 75%. Yes that is SEVENTY-FIVE PERCENT. Yikes.

No pun intended, but hydrogen seems hot again. The last time was about 15 yrs ago and there was a slew of books* and journal articles. Steve Pearce and I added to that onslaught by editing a special volume of International Journal of Coal Geology (v. 65, No. 3-4, 2006) that had 6 papers, which can be found here: https://www.sciencedirect.com/journal/international-journal-of-coal-geology/vol/65/issue/3. The papers ranged from identifying the suitability of certain coal to gasification 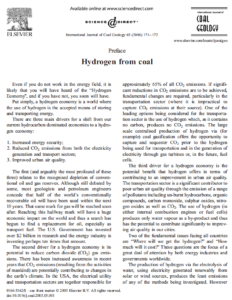 Of course, what all these papers have in common is that they use coal as the source of hydrogen. Today, the focus is on ‘green hydrogen’ (hydrogen that uses no fossil fuels) and ‘blue hydrogen’ (where CO2 is produced but is captured and stored).

Certainly hydrogen production with no carbon dioxide release is the target to aim for; in the mean time it will be just as important to delineate other avenues of hydrogen production, even if these are not utilized in the future. What this does is identifies the level of possible energy use for a country or region and – worse comes to worse – there is some energy security that can be maintained.

Final comment: Carbon capture and storage (CCS) is a fantastic technology, which is being developed in a number of places. We investigated it in New Zealand in the mid ‘00s and though the technology was promising, the limiting factor was the storage: there just wasn’t an appropriate reservoir that could take a reasonable volume of CO2 to make it worthwhile. My guess is that there will be a number of places in the world that will allow such storage, but certainly not all regions, like New Zealand, will be amenable. The one thing we know is that we can not change the geology – it is what it is and in most cases no amount of engineering will overcome incompatible subsurface conditions.