Climbing up Scree Slopes – Diversity and the Spectrum of People

There was a recent article in the Eos Science News by the AGU. As a whole the AGU is doing a great job at being relevant and topical in today’s geoscience world. Its dynamic and attracts a lot of young professionals, which is fantastic.

The article that caught my eye was titled “Teaching Geoscience History in Context” and can be found here . The article discusses how the history of geoscience is full of racism and even in today’s world can disadvantage some in our field. For the most part the article and concerns of the students are well founded and given in good faith.

Indeed, one student states “People agree that better science is done when more perspectives are included and a more diverse range of people are engaged in the science process.…If we want to make a field that’s more welcoming and will be a field that people who have a diverse range of backgrounds want to join, it’s important that the education process is honest about what the legacy of the field is and to indicate that we want to make a change moving forward.” 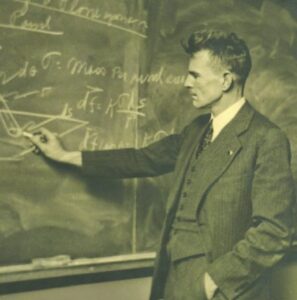 Absolutely agree – diversity and an abundance of informed perspectives are crucial to advancing our field.  When I lecture about Earth resources I always talk about M. King Hubbert. By all accounts he was brilliant but a real difficult person – in ways that are only hinted at. I always point this out; not to disparage the man but to teach the students that good ideas come from everywhere, even difficult or often biased and unpleasant people. There is a line in Aimee Mann’s song “High On Sunday 51”: ‘Hate the sinner but love the sin‘; she is pointing out that we as a society tend to do that – when it is the opposite we need to alight on.

There were a few points about this article that made me think:

← The Elixir of Data
Hydrogen →