by tim on August 16, 2017 in Education, News, Uncategorized, University

It was Ron Stanton (U.S. Geological Survey) who instilled in me the importance of proper representative sampling and John C. Ferm (University of Kentucky)* who drove home the concept of variability. In understanding the character of coal beds, these two concepts should mess seamlessly together. Or so you’d think … 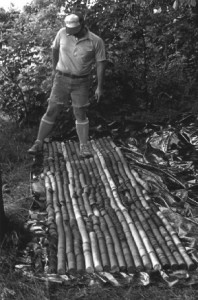 As it turns out there is a bit of creative tension between how a scientist might go about satisfying both the need to be representative as well as assessing variability within a section of rock.

Anyone who has sampled coal knows the standard method is to make a ‘channel’ from top to bottom of the seam. This entails digging a vertical ‘ditch’ into the coal so that equal volumes of material are collected throughout the sampling interval. In this way, there is a good likelihood that what goes into your sample bag is representative of the whole interval. Ideally, the seam is divided vertically into distinct sub-layers based on visible differences in the coal and these are ‘channeled’ and bagged as separate samples. But the basic goal of this method is to achieve samples that are fully representative of the interval you are investigating.

These individual channel samples are then crushed to the appropriate size and analyzed for any number of properties, for example, ash yield, or maceral or sulphur content, or specific trace elements or a relevant property related to the coking process. The results should, and likely are, pretty representative of what 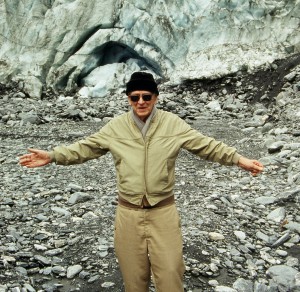 the actual properties are for that interval.

But the failing of a channel sample is that you end up with only one number for that interval. The error on the result is related purely to instrument error of the analyzing machine or, in the case of maceral analysis, the variance of components related to the binomial theorem (Snedecor and Cochran, 1989). Why does this matter? Well, if part of your objective is to define the compositional variation between different layers of coal and to determine if the differences are significant, then, frankly, you’ve failed.

The reason you have failed is that without an estimate of the true variability within your sampling interval (i.e. variance) you cannot test if two adjacent coal intervals are statistically different or statistically the same.

The only way to determine if two intervals are actually compositionally different is to assess the internal variability in each layer, which then allows the within variability to be compared to the between variability. Some relatively simple statistical tests will then tell you if the two intervals are significantly different or not. For coal, collection of 2 or more block samples per interval would allow such a variance test. This methodology is known as ‘stratified sampling’ and has been detailed in a recent article in the Indonesian Journal on Geoscience (Moore, 2016). It is a well-known and mature sampling methodology applied to many other areas of science, especially geology, but seldom in the assessment of coal properties.

So why has sampling of coal primarily utilized the channel sampling method? I’m sure there are many reasons, but 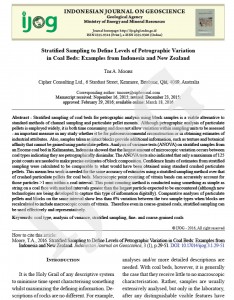 my opinion (and we are firmly in the realm of opinion here) is summed up in one word: steel. The Germans and later the Americans (think Penn State University and Bethlehem Steel Co. specifically) successfully worked on predicting coking coal properties based on petrographic composition (e.g. see Bensley and Crelling, 1994; Buø et al., 2000; Kaegi, 1981; Panaitescu and Predeanu, 1998). At the time, the focus was only on either the bulk sample from stockpiles or whole seam composition direct from the source mines. There is no arguing that within limits this worked and continues to do so.

However, this method of sampling was adopted, seemingly without much critical assessment, throughout the rest of coal science, even where this approach was not the most appropriate for the question being asked; though it is perhaps a common human trait to try and apply the same model across all applications (similar to some governments wishing to apply a market based model to, say, university teaching [think New Zealand in the late 1990s – thankfully this was never implemented]). 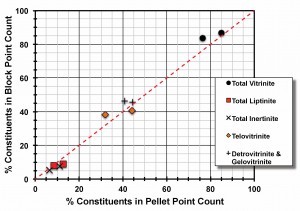 [channel] and block [stratified] samples); however, channel samples may be representative of an interval but does not permit any interrogation of variability. This failing of the channel sampling method closes the door to almost all statistical assessments that are universally employed in other branches of geology and science. Without these statistical tools, where is the rigor in our science?

Perhaps it is time for a reassessment of how we sample coal.

*Sadly, both of these two gentlemen are deceased. Ron died in 2001 (see http://www.tsop.org/Stanton_memoriam.html for his obit) and John passed away in late 1999 (see Hook (2002) for a review of John’s career and Hook et al. (2002) for his bibliography.  Also, see the Cady Award acceptance speech by John (Ferm, 1992) – his achievements, I think, truly define what a recipient of the Cady Award should be†. There is little doubt that John measures up to Gilbert Cady’s achievements. But like so many awards, there seems to be a perceived need to give it out yearly, whether there are any worthy professionals or not. In the end, this only cheapens the accolade).

†The acceptance speech by John is actually a hard thing to find online (your only option is finding a hard copy at a library and photocopying it). Thus, for those interested, click Ferm, 1992 and you can download a pdf. The Response to the award which John wrote is a pleasure to read and I’d encourage all to download the article – not just for his accomplishments, but to see how beautiful such a reply can be. As was John’s way, his words and illustrations are carefully sculpted with élan and precision seldom seen in professional journals. His was indeed a life well lived.