To most people, a rock is hard, static and immoveable. But like most things in life, that is all relative. Take a drive through almost any mountain range and you’ll see rocks that have been twisted and folded, contorted and pressed. These dynamic scenes are almost always composed of rocks rich in minerals (think sandstones, siltstones and claystones), but if these rocks are limber, then coal is downright elastic. 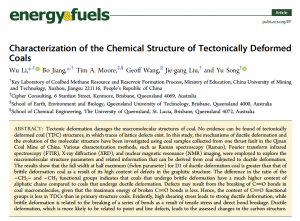 Coal, for the most part, is not crystalline in nature; instead it is composed of complex organic molecules, and thus there is considerable latitude for bending, sometimes even flowing. A new paper published in Energy & Fuels* examines just how the coal is modified at the molecular level when its pushed and squeezed; these coals have been termed ‘tectonically deformed coals’ or TDCs, for short.

The study uses a combination of analytical techniques including Raman spectroscopy, NMR, FTIR and XRD to examine the differences in molecular structure between TDCs that have been deformed through ductile or brittle processes. One of the main findings is that coal deformed in a brittle manner have more aliphatic chains than coal deformed under ductile processes. The smaller proportion of aliphatic chains in the ductile deformed coal is thought to be a result of the higher number of defects in its molecular structure. 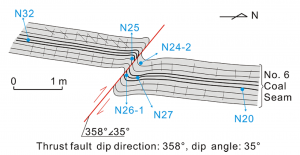 The outcome of the study is a model that predicts the types of defects in molecular structure based on style of deformation. This may ultimately have implications for prediction of coal character as well as microporosity evolution in coals and the influence of gas holding capability, among other attributes.

← Vinegar, Noodles and Alice in the Triassic
Playing the variance lute →