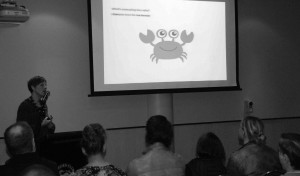 Prof. Joan Esterle (and Chair of the Vale-UQ Coal Geoscience Program as well as being ‘godmother’ to my son Micah!) was presented with the Dorothy Hill Medal on the 27th of July. The award is given out by the Queensland Division of the Geological Society of Australia each year and this year it has gone to Joan for her contributions to the understanding of Queensland geology. Many coal scientists will know that Joan has worked for many years on all aspects of coal geology around the world, but of course a focus has been Queensland, where she has lived since late 1991. In particular, Joan has been able to bridge the academic with the applied aspects of coal geology, working on such things as: the relationship between breakage properties of coal and its macro- and microscopic composition; how vegetation type may influence key coal properties for combustion or methane generation; 3D depositional models that span multiple mines and helps makes sense of the wider basin development and point to where the best coal is; to prediction of geohazards in mines from an interpretation of sedimentological patterns.

Dorothy Hill (1907 – 1997), from whom the award is named after, was a born and breed Queenslander, having grown up in a suburb of Brisbane. After studying chemistry and geology at University of Queensland (UQ) she won a scholarship to Cambridge University. Before the start of World War II she returned to UQ where she worked extensively on the stratigraphy and palaeontology of Queensland. Hill was the first female fellow of the Australian Academy of Science but it is her research that she most is renowned for through out Australia. She retired from the University in 1972.