High up in Colombia

by tim on October 5, 2016 in Commercial, Education, News, Uncategorized, University

The lyrics of Neil Young* were going through my head as we trundled down the decline of a mineshaft at 3000 m elevation. We had left the brilliant blue skies of the Andean cordillera moments before, plunging into the darkened tunnel; we were headed for the Guaduas Formation (Late Cretaceous – Paleocene), which contains some lovely coking grade coal. And, not coincidently, the seams are gassy.

Inside a Colombian mine. Tim Moore (far right) discusses with colleagues the geology of the mine.

After two kilometers of steadily dropping in elevation we arrived at our destination. An upwards hole through the stratigraphy. The seams dip at about 25-35º and so multiple seams are mined interconnected by somewhat small and a little bit precarious tunnels that burrow straight through the rock to the next coal bed. On average the seams are 0.5 to 1 m, but luckily (if that is the right word) they mine through the rock above and below the seam too, in order to give a bit more headroom.

I was in Colombia in mid September for 10 days as Cipher Consulting is part of the Consorcio EG Carbòn Metano that won a Colombian government tender to identify a mine in which to conduct both a coal mine methane (CMM) and a ventilation air methane (VAM) pilot. We were also asked to give recommendations on a methodology to evaluate, classify and quantify gas resources and reserves within Colombia. 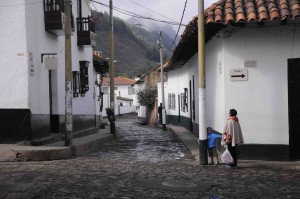 The driver for the Colombian government is three fold:

We visited a total of four mine sites, all underground, before returning to Bogotá. On the last day I gave a talk with our recommendations to government Ministry officials, other researchers and industry representatives.

During the trip north of Bogotá I was treated to the wonderful hospitality of my Colombian colleagues as well as every other Colombian I met over the 10-day period. It is truly a lovely country with truly wonderful people. Passionate and kind and a love of food, which saw me gain more than a few ounces!

Many thanks to my traveling companions and colleagues (Jorge, Maryen, Juan Carlos, Ruben, William, Freddy and others) on this trip and I look forward to seeing them on the next visit! I’ll be ready for more obleas and lemonade de coca. 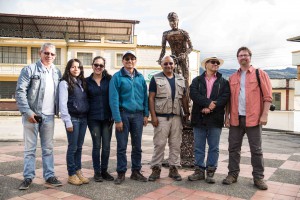 Group photo near the end of the field work. Tim Moore with Colombian colleagues.

*“Well, it was/back in Blind River in 1962/When I last saw you alive/But we missed that shift/on the long decline/Long may you run”. – Neil Young “Long May You Run”