It looked like machines and the weather were conspiring against us. The last flight from Denver to Gillette, Wyoming was ‘temporarily’ delayed (which in airport speak means “quite possibly cancelled”) and then there was the weather.

I had flown the previous day from Brisbane, Australia to Denver to meet the field trip participants at one of the airport hotels. They had flown from various parts of South Korea the day before. I and Dr Romeo Flores (from Denver and retired from the U.S. Geological Survey and now an independent consultant) were taking people from Korea Gas (KOGAS), MOTIE, Welcron Hantec 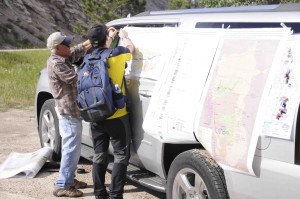 Together we were aiming to give our South Korean participants a good overview of the geology of a biogenic CBM play as well as observe the wells, pipelines, and compression stations. The field trip had been set up through Prof. Joan Esterle at the University of Queensland, Brisbane; she is the expert advising to KOGAS in Australia. KOGAS has a stake in one of the CBM to LNG plants that has started production from the Surat and Bowen Basins in the last year.

Luckily, back at the Denver airport, they had found another plane. So a swift change of gates and we were on our way to Gillette – about an hour or so flight north. However, just as we were about to land, we were told that landing was not going to happen because of a large thunderstorm that was moving from the north and about to engulf the airport in Gillette. We’d have to fly back to Casper and land there and then bus up (at least an additional 3 hr journey). Basically killing our schedule for the first day.

But our despair was short lived; almost as soon as the stewardess announced this, the pilot started a rapid descent; apparently he was ‘going for it’ and we were going to land. As we banked clockwise and corkscrewed down I could see a grey, thick wall of cloud and rain. The run way was still in light and was visibly dry but for how long?

We made it down without further delay or incidence, got our bags, and cars and headed south and west. There were a few cloudy bits and sprinkles but even at the outcrop we stopped at, the rains held off and we were able to see the transition from one member of the Fort Union Fm to another. 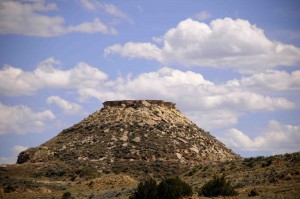 The rest of the trip was spectacular. After a steak dinner that night, the following morning we met with the Bureau of Land Management (BLM) for a run down on how the permits were given out and the general management of environmental concerns. That afternoon our BLM hosts took us to CBM wells and facilities as well as some multi-well pads for shale gas production. In the afternoon we met up with a pipeline and compression company – one of a few that is left still working in the Powder River. We drove north on gravel roads for about an hour to near the Montana state border. It was a lovely drive through the sage brush and across dry stream beds and gates.

That evening saw us back in Gillette and another good Wyoming steak house. A few bottles of fine wine (one from Australia, one from Sonoma, California) were consumed by the group and we all had a good sleep.

The next day saw us at one of the famous large coal mines south of Gillette on the eastern side of the Powder River Basin. This was a chance to actually see the coal seam reservoir. The 25+ m thick seam we saw was wonderful; exposed for a kilometer or two in the pit we could clearly see the internal coal facies and how they varied laterally. The sediments above the seam also told their own story of how this basin was formed and environments that existed here during the Paleocene. 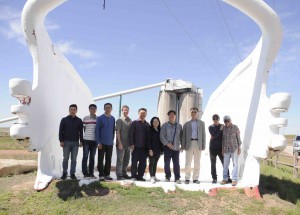 Field trip participants and leaders, standing in an old drag line bucket from one of the mines, Powder River Basin, Wyoming

After the mine we headed back to the Gillette airport and our flight back to Denver. I went directly back to Australia from there, but our guests stayed in Denver another day to have a further look around. It was a fast trip to the Powder River Basin, but one that packed in the sites and knowledge.

← WHY DOES INDONESIA HAVE SO MUCH COAL? – NEW PAPER OUT IN INTERNATIONAL JOURNAL OF COAL GEOLOGY
Professor Joan S. Esterle Wins Prestigious Dorothy Hill Medal →