by tim on September 23, 2019 in Commercial, Education, News, University

The second year of this field trip saw us going up the southern Queensland coast looking at both the modern and ancient geological environments. The students are first and second years, from the School of Resources and Geosciences from Xuzhou, China and come for 15 days. In almost all cases this is the first time these students have been to Australia or even overseas. 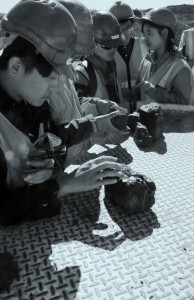 Initially we work out of Brisbane for a few days while the students get acclimated to the weather, culture and general environment. Since we are only 2 hours ahead of China, luckily there is little to no jet lag!

This year we also visited the Jeebropilly coal mine just west of Brisbane. The mine has been active for about 25 yrs but is due to close at the end of 2019. The staff there, from New Hope Mining, was amazingly helpful in setting up the visit; they were incredibly accommodating during the whole day.

The section exposed at the Jeebropilly coal mine is the Jurassic age Walloon Subgroup with up to 30 or more thin (<0.5 m) thick coal seams being mined. The type section for the Walloons is not far from here and, of course, extends 100s of km northward into the Surat Basin, where one of the largest coal seam gas (CSG) coal fields in the world is located.

The Surat basin is composed mainly of clastic Cretaceous to Jurassic‐age sediments with some intervals having significant volumes (6‐10%; Esterle et al., 2013) of coal seams. The thickest preserved section is over 2,500 m (Ryan et al., 2012). The main coal‐bearing interval within the Surat Basin – and the major focus of current CSG to liquefied natural gas (LNG) development – is the Walloon Subgroup. Other formations also contain coal seams but they contain significantly less coal seams than the Walloon Subgroup. 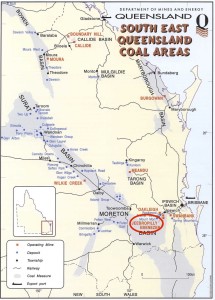 Map of SE Queensland showing Surat Basin and location of Jeebropilly coal mine.

Of particular note, differentiation of the coal measures is a non‐trivial task. Even with CSG production well spacing of less than 750 m, multiple operators cannot consistently pick the tops of these units, although most picks are within a few tens of meters. Litho‐stratigraphic, chemo‐stratigraphic, sequence stratigraphic methods and even stochastic models (Esterle et al., 2013; Martin et al., 2013) have all yielded interesting results in terms of refining correlations, but not quite as detailed as hoped. Despite these challenges the different coal measures can generally be found over most of the eastern Surat Basin. In general, the Upper Juandah and Taroom Coal Measures tend to have slightly thicker coals than the Lower Juandah Coal Measures but coal seams in all coal measures are numerous and laterally discontinuous (Esterle et al., 2013; Morris and Martin, 2016). The Tangalooma Sandstone is not a single sandstone, but an interval made up of a number of individual sandstone bodies separated by fine grained clastic sediments and sometimes coal seams. The upper and lower boundaries between the coal measures are somewhat diffuse and there is a degree of subjectivity in picking tops. The Juandah sandstone is not an officially recognised subdivision and can go by other names, such as the Wambo sandstone (Ryan et al., 2012). This particular sandstone unit is even more diffuse and harder to pick in geophysical logs than the Tangalooma Sandstone, but enough data has been collected to establish its existence.

In 2021 we plan on taking a group of 3rd year Queensland University of Technology students to China for a reciprocal geology field trip. If you’re a student contact us if you are interested.