I was flying through the chill Christchurch air with my arms outstretched like some newbie superhero about to make a hard landing on frosty, frozen gravel.

I had just been cycling through Hagley Park on my way to work thinking about how to put together a disparate set of papers for a book when I noticed a dog, which seemed perfectly calm. A quick mental calculation said there was no danger. My risk assessment was wrong.

The dog suddenly turned and ran right into the front wheel of my bike.

A bent wheel frame was the major suffering, though it was pretty obvious that the chocolate lab was going to be a little sore the next day, as I was. 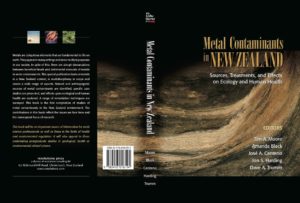 Front and back covers of Metal Contaminants in New Zealand

I had been distracted mulling over a multidisciplinary government funded project assessing metal contaminants in New Zealand. It was a unique study for New Zealand because we were combining geological assessment with mining restoration engineering, ecological benchmarking and human health issues associated with metals in the environment. The field is broadly known as ‘Medical Geology’ and has gained some momentum over the last decade or so.

Corralling authors not only through out New Zealand, but also from the U.S.A., Australia and Europe was no small potatoes, but it was rewarding. It was the culmination of a Foundation for Research, Science and Technology (as it was known then) grant and it’s certainly one of the things I’m most proud of during the time I spent in New Zealand – a tangible output which is a ready reference assessable to all. 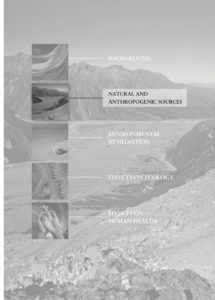 The book was divided into five separate sections.

The book*, published 15 yrs ago now, would not have been completed without the hard work of the authors for each chapter and my co-editors (Prof. Amanda Black, Dr José A. Centeno, Prof. Jon S. Harding and Mr Dave A. Trumm). Equally, the financial support of several organisations (Environment Canterbury, resolutionz consulting ltd., Environment Southland and Solid Energy Ltd.) offset the costs of publication.

However, I would like to say that it was the foresight of Don Elder, who was CEO of Solid Energy at the time, which was integral in the book’s birth. Without his support of the project, allowing data, funds and time of his personnel to participate in such a project (with no influence or strings attached to any of the reported results), it would have been unlikely that the book would have happened. Don was, and still is, the best CEO I have ever worked for.

The book is now out of print, although I still have some hard copies and of course electronic copies are still available on request to myself.

← New Paper (and Poster): Isotopes and organics in the Early Cretaceous of Inner Mongolia
The Elixir of Data →