by tim on October 10, 2018 in Commercial, Education, News, University

A while ago I reviewed a book on coal. Recently I saw it on my book shelf and thought it might be interesting to put that review up on the Cipher blog. Below is a slightly abridged version of the original review. Enjoy.

I knew something was up when upon entering the shop the friend I was with immediately snatched up a something on display and turned away.

I had seen the small and beautifully presented book on coal, thus scuppering it as a potential future birthday present. In my years working as a geologist I have rarely seen a popular book on coal.   These days, coal is mostly a four letter word; though for the most part the general public knows little of the science or the history of coal.

As Barbara Freese* demonstrates, the human race and coal have lead a symbiotic existence for centuries which has empowered cultures and shaped empires. But while coal was giving us heat and the ability to forge metal, it was also causing our cities to fill with ‘bad vapours’. As the story of ‘Coal: A Human History’ unfolds, Freese reveals the complexities of the good and the bad effects. While 17th century Londoners were already complaining about coal smoke, they were benefiting from better health from the heat and lighting that were provided by burning coal. The black seams of today maybe vilified but there is little controversy that these same seams have also greatly benefited humankind. As Freese says “coal alone did not make the industrial revolution happen any more than coal alone made Britain a global 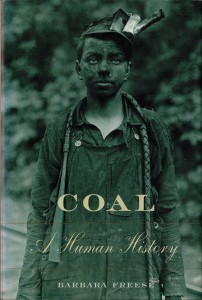 superpower, but neither event could have happened without it”. This revolution eventually bought us modern cars, houses and even pianos, which many of us have sitting in our living rooms. To get these things though, the coal industry needed labour and needed it fast. British coal barons two centuries ago were, sadly, the forerunners in developing an economy based largely on child labour.

Only a few decades later in America ‘King Coal’ (as it was seen then and to many still is) was the force behind that nation’s burgeoning industrial era. It is no consequence that the cradle of America’s railroads was in the anthracite fields of Pennsylvania. It was not until those deposits were depleted and the much more widely dispersed bituminous coals to the west were mined that the grip of the Pennsylvania rail tycoons were broken. In a fascinating web of relationships Freese shows how the labour unions grew out of that shift of where coal was being mined.

As Assistant Attorney General for the State of Minnesota, Barbara Freese became interested in coal’s ‘other history’, its human history, while enacting pollution legislation. The only time the story becomes a bit predictable in this otherwise well researched book is when she writes about the last decade. Instead of letting the facts unfold for the reader to decide, Freese has a more heavy handed approach, becoming a bit lecturing. Fortunately, there are only a few digressions along these lines and the book allows readers to immerse themselves in the complexities of coal, it’s history, and the foibles of human nature. I’d recommend this absorbing and fascinating book to anyone interested in how humans interact with the natural environment to both their detriment and their good.