Yes, I know. Normally the words ‘blue skies’ and ‘Beijing’ aren’t in such close proximity. Yet, when I was there just a couple of weeks ago, it was indeed blue skies. Warm, yes; smoggy, not really. Though I was inside much of the time …

I was in the captivating capital of China for the 35th Annual Conference of The Society for Organic Petrology (TSOP) (https://www.tsop.org). This year it was hosted by China University of Mining and Technology, Beijing and of course that means Prof Shifeng Dai was once again at the helm. As usual, it was smoothly run, with excellent talks and super entertainment. 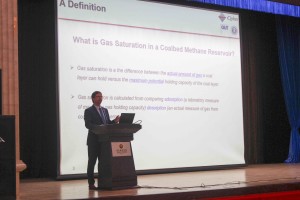 Tim Moore delivering a keynote address at the 35th TSOP Conference in Beijing, China in August 2018.

I had the pleasure of several tasks while in attendance. Firstly, I was one of five presenters at a three-day, pre-conference workshop. I had three topics:

It was a bit of reunion of sorts with two of the workshop presenters and myself. Firstly, Jack Pashin, who was speaking on unconventional gas systems, attended University of Kentucky the same time I did. I still recall a memorable trip to the Bahamas where he, Peter Goodman and I drove to Florida and then with the rest the class flew to San Salvador Island.

Also presenting at the workshop was Bob Finkelman, who is all things inorganics in coal and an early proponent of medical geology. I have known Bob since my early days at the U.S. Geological Survey (1979) and in the early 2000s he was on a project of mine in New Zealand looking at metal contaminants. An outcome of that research was an edited book on the subject*.

For the conference itself I gave three talks. The first talk was an invited Keynote, which started out the conference. The subject addressed controls on gas saturation in coal seam reservoirs**. The abstract for that talk can be found here: Moore, 2018. 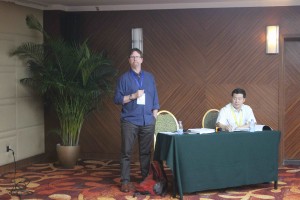 Tim acting as session chair at the 35th TSOP conference.

Next talk was on the Tanjung Formation in SE Kalimantan, Indonesia***. The interesting thing about this coal-bearing formation are the volcanogenic sediments, which until now have not been described. The abstract of that talk can be found here:  Moore et al., 2018.

Finally, my last talk was on temperature data from the Surat Basin, Queensland, Australia****. Usually, we think about how temperature modifies organic material, but in this case we were able to show how carbon (e.g. coal) modifies temperature (e.g. geothermal gradient). The abstract for that talk is here: Moore & Ryan, 2018.

← Bangers and Mash with a good dash of Pickel
Still an interesting read – COAL: A Human History →