by tim on October 11, 2013 in Education, Uncategorized, University 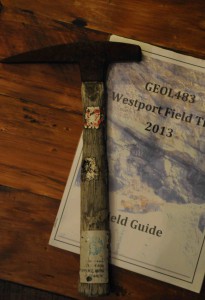 The lost hammer, found again, after spending a year in the open on the Denniston Plateau, West Coast, New Zealand

For those of you following this blog, you might remember that last year, on my annual field trip for the Geology 483 class (University of Canterbury), I lost my hammer. As is usual, this year as last, we visited the Denniston Plateau, which has an excellent geological section extending from the basement (Greenland Group meta-sediments; Ordovician to Cretaceous) with the unconformable overlying Brunner Coal Measures (Eocene) up through an overall fining-upward sequence culminating in the fine-grained lacustrine mudstones of the Kaiata Formation (Late Eocene).

After the students and I had spent the best part of the morning looking at the sediments – in lovely sunshine I might add – we ambled back the couple of kilometers to the vans savouring the views from the plateau. As we walked back, I ducked in and out of various places that I thought I might have sat down or taken a photograph the year before. But nothing.

Just as we were approaching the vans I ran quickly up to Burnetts Face (where we visited last year but not this year).  I had no hope of finding my lost hammer, as it seemed unlikely that I had left it there or if I did, surely some other geology group would have picked it up and gave it a home.

But as I scrambled over the scrubby gorse bushes, placing my feet carefully from boulder to boulder, there it was – the wooden handle obviously weather worn and in need of some loving oil and the head dark brown and flakey with rust. I was overjoyed and gave a loud whoop as I ran back to the vans and the laughter of the students.