by tim on October 11, 2013 in Commercial, Education, Uncategorized

In June of this year, Gas Specialist Chris Nelson was in Botswana overseeing desorption testing and sample collection as part of Cipher’s services to Exxaro Resources. The Late Permian coal measures in the Kalihari area of Botswana are being investigated for coalbed methane (CBM) potential. 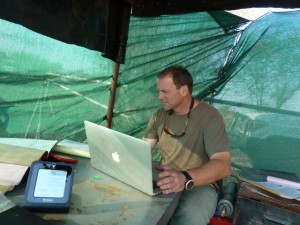 The coal deposits of both South Africa and Botswana (and, of course, other adjacent countries) have been the focus of numerous exploration ventures for coal and, more recently, CBM. Not unsurprisingly, a number of reports have also been published on these deposits over the years (e.g. Bennett, 1989; Cairncross, 2001; Catuneanu et al., 2005; Johnson et al., 1996).

As outlined in the above publications, these coal beds can vary from low to relatively high rank and the geology, though not overly complicated, is not considered boring (e.g. Modisi, 2000)! One of the features of the Permian coal measures in Botswana and adjacent areas are the dyke swarms which has profound local and regional effects (Le Gall et al., 2005).

Its been said that no two coal basins are the same, and this has certainly been proven to be the case from the experiences of the Cipher Associates. However, using sound approaches to data collection, assessment, analysis and interpretation has always given our clients the best information to base investment decisions. Knowledge is a powerful commercial tool.