Sadly, I lost a trusted and long-time friend on the Geology 483 field trip: my hammer! I must have taken it out somewhere, either at 12-mile beach, or on top of the Denniston Plateau (perhaps at Burnetts Face) while leading the students around and … well, somewhere out there, she lies. 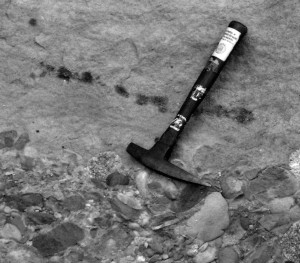 I would have had that hammer for at least 30 years, though I can’t remember the exact date I got it. I do recall I was given it as part of field work I was doing at the US Geological Survey. I also remember once, while doing my Masters degree in the Powder River Basin, I accidently left it on top of a hill where I had lunched after doing my morning measured section. Upon returning to the 4WD, I discovered I had left it. A moment’s debate as to whether I wanted to climb that hill all over again and off I went to retrieve it.

My hammer featured in more than a few photos (as is the wont of geologists), and some of those photos even made it into publications, like the photo seen here from Moore et al. (2006)*. I suppose there is a tiny chance that I may find my hammer when I return next year (or a tad sooner for other reasons), but at least it had ‘died’ in action, as a geological hammer should!