The Passing of a Splendid Geologist: Chairul Nas

Dr Chairul Nas, one of the most well known geologists in Indonesia, passed away on the 18th of December 2022. Not only was Chairul a treasure trove of geological knowledge but he was also a stellar teacher, researcher and mentor. Those of you that attended the 2015 Annual Meeting of The Society for Organic Petrology (TSOP) in Yogyakarta and went on the Mahakam Delta/Lakes field trip in Kalimantan will remember Chairul and his ready

Dr Chairul Nas at a field trip stop in Kalimantan Timur (Borneo), Indonesia during the 2015 meeting of The Society for Organic Petrology (photo © T.A. Moore)

smile and sparkling sense of humour.

Chairul had been ill for some time after having a stroke and over the last year or so had moved from Jakarta to Padang, Sumatra. He was born in Solok, Sumatra Barat on the 10th of November 1950. He celebrated being a Sumatran and to anyone who knew him, he was a constant cheerleader for Padang food. A visit with him never passed without at least one trip to a Padang restaurant, which can be found all over Indonesia. And indeed, my favourite Indonesian dish is spicy beef rendang with rice – you can’t get more Padang than that!

Chairul graduated from the Academy of Geology and Mining in Bandung Indonesia with a B.Sc in Geology in 1976. Later he gained the degree of Engineer (Ir) in Geology from the prestigious Institute of Technology, Bandung (ITB), Indonesia in 1986. It wasn’t long after that when he moved to Wollongong, Australia and gained his M.Sc in 1990 and then his Ph.D in 1994, both in Coal Geology from the University of Wollongong.

Chairul held many professional positions, both before and after getting his PhD. Prior to Wollongong, he worked at the Mineral Technology Development Centre in Bandung, Indonesia, first as a staff geologist then as a Chief of one of its groups from 1978 to 1988. From 1994 to 1997 he was a Project Manager at the Manpower Development Centre for Mines in Bandung, Indonesia. He then worked for industry from 1997 to 2001 as Chief Geologist for P.T. Austindo Nusantara Energi (Coal). Finally, since 2001 Chairul has been a lecturer at the Department of Mining Engineering, Trisakti University in Jakarta.

Because of his great knowledge of Indonesian geology, Chairul also worked as advisor to many companies over the last twenty years including Sarinah Resources, Tigers Realm Group, Arrow Energy International, P.T. Geoservices and P.T. Kaltim Prima Coal, among others. He was a Cipher Associate consulting on various projects since 2010. Chairul was also instrumental in helping to establish an internationally recognised methodology for coal resource assessment for Indonesia. He was Chairman and/or Member of numerous committees including the Group of Exploration-Resource and Reserves, Association of Indonesian Mining Professionals (PERHAPI); the Indonesian Coal Mining Association; and the Committee for Coal Geologists Certification Program (IAGI). 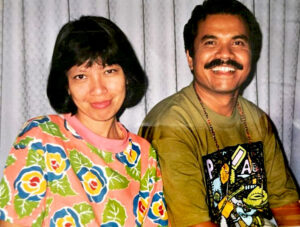 Chairul had numerous publications and although I do not have a full list, the ones I do have are given below:

I’d like to end with a final note about Chairul. Three of his personal traits were kindness, honesty and loyalty. While I was working at the Wyoming State Geological Survey in 1992 he reached out to me through an email on the (still) nascent internet asking if I could act as an advisor on his PhD. Of course I said yes and from that moment on I had a life-long friend; one who gave more to me than I could ever have given to him. Although he would sometimes tease me about one thing or another or gently correct me on various aspects of Indonesian geology, his broad open smile always told me it was given in a kind, heartfelt manner. Chairul’s spirit and geological nous will reign on for some time to come and I hope I can live up to his example both as a human and a geologist.

← Its ON! – – The 38th Annual Conference of The Society for Organic Petrology (TSOP) – ORGANICS IN THE GEOLOGICAL CYCLE