Cipher Conducts CBM Workshop for the Geological Agency of Indonesia

by tim on April 17, 2017 in Commercial, Education, Uncategorized, University

Arriving in Bandung at 11pm on an early February evening the first thing I noticed was the coolness.

Of course I already knew that Bandung, being over 750 m above sea level, is much cooler than Jakarta. But I was travelling from 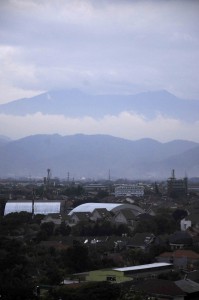 View of Bandung and 2,400 m volcanic mountains which surround the city.

Brisbane, Australia where the temperatures had been above 35ºC and often over 40ºC for the last five weeks. To say the least it was a welcome change for the cooler.

Although there is still not a great deal of activity in terms of coalbed methane (CBM) exploration and development going on in Indonesia, The Geological Agency of Indonesia is still doing a great job at assessing their resources. Their work translated into a request that I give a workshop on gas assessment techniques in coal beds.

The techniques covered the ‘nuts and bolts’ of what is needed in the field, at a drill hole site, in order to accurately and consistently collect gas data from desorbing coal cores (this nuts and bolts approached covered the practical nature of being in remote tropical areas, under challenging conditions with ‘hot’ reservoirs and unknown gas quantities). The course also covered what other data are important to maximize knowledge of the reservoir (for example, adsorption samples and how to sample for these; when and how much gas compositional data should be collected; and how many samples are needed to assess the petrography and rank of coal).

The key part of the workshop was emphasizing that it is exceedingly important to collect data that are both scientifically sound and abundant so as to be statistically testable. While collecting data in an exploration program is not meant to be academic, the procedures need to adhere to high levels of scientific protocol.

Because, when it comes to assessing resources and reserves, either internally within an exploration company or agency, or externally by a third party, the more defendable the methodology the lower the uncertainty in the final numbers. With higher confidence come more solid resources and reserves. This increases the market capitalization for a company allowing it to leverage more funds for further exploration and development. In the case of governmental assessments, this ties directly into a country’s credit rating and a plethora of other economic indicators.

After the two-day workshop we had a day touring the laboratory facilities of the Geological Agency. Later, as requested, Cipher gave an overall assessment of the Agency’s procedures with recommendations for improvement. We are currently working together on how to enact some of these ideas. As often stated in my conference talks, I am a firm believer in the deliverability of Indonesia’s CBM reservoirs; there needs to be the right regulatory regime and then a period of intense practical, in-field engineering of test pilot wells, but if these things can happen, there would be commercial CBM production.

After a whirlwind three days, I reluctantly left my Indonesian hosts and returned home. Usually, it is with anticipation, at least, that I can look forward to cooler weather than that of tropical Indonesia – but not this time; it was back into the sweltering 40ºC weather of summertime Brisbane.