The next morning we woke up in the Miocene.

After two full days of living in the present, we found ourselves fossicking around in sediments that were 15 million years old. They say a lot can happen in an afternoon, and indeed a lot did happen in the previous 5 billion afternoons.

The march of the Mahakam river delta began in the early Miocene, possibly as early as the Late Oligocene. Triggered by tectonic events external to the region, the uplift of the central Bornean massive supplied the sediments and the gradient. The great march had begun.

Flaggy, organic-rich sandstones at the top of the Pulaubalang Fm. Dr Ferian Anggara for scale.

The climate was probably not much different from what it is today (think hot and sticky); the island of Borneo has rotated counter clockwise about 30 to 40º since the Late Oligocene but has pretty much stayed straddling the equator.

The climate, the basin subsidence, and the depositional setting were the right conditions for accumulation and burial of large amounts of organic material (Friederich et al., 2016). The peats accumulated in between the river channels gaining multiple meters in thickness. In more stable areas the peats accumulated undisturbed for perhaps well more than a 100 m.

In the more sedimentologically active delta areas, sediments accumulated along side thin (a few meters) peat mires.  As the delta moved eastward an almost monotonous mix of peat, sand and clay became transformed with depth and temperature into coal, sandstone and mudstone. At the present-day eastern terminus of the delta, Miocene sediments are an almost unbelievable 10,000 m thick (Hall and Nichols, 2002).

On the first day of the field trip, we had walked up through the underside of the delta edge, at the interface between open marine waters and river channels. These channels would have carried significantly fresher water into the shallow sea. We saw the distributary mouth bars and subaqueous channels give way to terrigenous, plant filled river sediments and peat mires. We saw the drama of land battling the river as the peat accumulated; we could see when the land plants reigned superior only to sink and be overtaken and conquered by the river once again. Eventually the river found a new course and moved on – avulsed elsewhere – allowing the plants to return and form peat again – in a new and seemingly unending cycle. 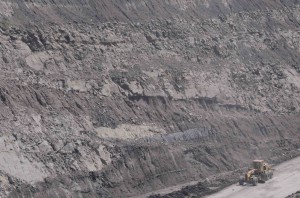 On the last day of the field trip, the day we made a return to the past, we visited a coal mine where we could view the battle of land and sea and river played out in three … no: four – dimensions. Time, that fourth dimension which disguises itself as depth, is an underrated and equally little understood facilitator of change. As humans with life spans of less than a hundred years (36,500 afternoons) we are stretched to feel the weight of 10,000 orbits around the sun, much less 10 million or 20 million orbits.

But, there in the mine, time was laid out in front of us. The channels filled with sands, the small lakes frozen with mud, the peat mires compacted and squeezed. Over and over again. One on top of each other; no pattern quite repeating the progression before or after it.

Who could tell what really compacted those sands, clays and peats into sandstone, mudstone and coals: the weight of the overlying rock or the inevitability of time itself?