After nearly … ummm, well, lets just say a long time, my coalbed methane (CBM) review paper has been published (Moore, T.A., 2012, Coalbed methane: A review, International Journal of Coal Geology 101, 36-81). Admittedly, it was I who took a while to write it (my excuse is that at first I was Country Manager (for Arrow Energy), then starting my own consulting firm (Cipher), then having a small child (Micah Allen Setianto Moore), not to mention weathering the earthquakes in Christchurch that shook my house like a mouse in the jaws of a very large cat). Nevertheless, to download the paper go to: http://dx.doi.org/10.1016/j.coal.2012.05.011 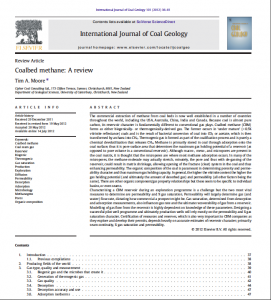 I wrote the paper with an audience of students and colleagues new to CBM in mind. The expressed scope of the paper, thus, was to be broad rather than deep. At first I wrote the paper in a quite ‘relaxed’ tone, but as this didn’t go down well with the reviewers I subsequently tightened up the language a bit, taking out anecdotal stories and references. Still I got in a few musical references (including ‘Canary in a Coal Mine’ by the Police) and some other musical similes.

As I say in the paper, it “… will be organised with two major bounding milestones: exploration and production – but in the opposite order. By looking at the production of some CBM basins first we can gain a perspective of the scale and potential that CBM can manifest itself in the world’s markets. Towards the end of the paper, critical reservoir properties used in the assessment of an exploration program will be reviewed. The middle part of the paper will explore how a coal reservoir works and what controls gas occurrence. Finally, two brief reviews will be given, one on enhanced CBM and the other on the impacts of CBM”.

As should already be apparent, I am a great fan of characterization of uncertainty in any technical project. I only briefly discuss uncertainty in this paper, however. But in one of the footnotes that got cut (I’m a fan of footnotes, the journal is not) perfectly illustrates the problems inherent in cultivating a culture of probabilistic analysis within the geological fraternity:

“Demonstrating that a prospect may have low uncertainty is as important as identifying the higher, more uncertain projects. A conversation I had with a professional of 30 years experience went like this: “Him: we don’t need uncertainty analysis on this as we have so much data I know how much gas there is. Me: Really? Him: Absolutely!. Me: So you are saying it will be exactly 867.2 BCF and not 867.1999 or 867.2001BCF? You would bet your house on it being exactly 867.20000 BCF? Him: Well…nooo…’ The point being that if an uncertainty analysis were to support such a small degree of variance, this would be as important in helping investment decisions as would a large uncertainty result”.

The above is an absolutely true story.