Well, not quite ten, but it was ten years this month that I was asked, and then accepted, to write a review paper on coalbed methane*. 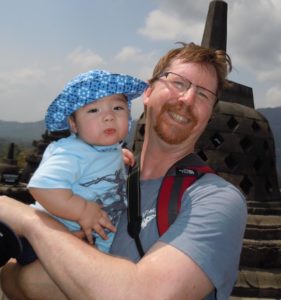 Between starting of the paper and its publication, I also produced my son Micah seen here with me in Borobudur in 2011.

It took about another two years until it was actually published** but the work began in May 2010. It took a bit longer than I hoped (and the editors were very patient!), but then again 99% of my work life has always been in non-research roles; so I had to fit the writing in around my regular, industry, ‘day job’.

But I think part of the success of the paper was exactly that: At any one time, I usually only have one foot in academia but three in industry (I know it doesn’t add up, but I’m making a point…). I tried to write the paper for new entrants in the coal gas field, whether they were in industry, research, university or government. As I said in the text, I wanted to write it in a less formal, more assessable tone than regular research papers. And in the process I was able to slip in references to a Police song (Canary in a Coal Mine – no surprises there!), the intimacy of perfume (in talking about gas diffusion), and some musical similes (Haydn and Beethoven) among other things. To say the least, it was fun. 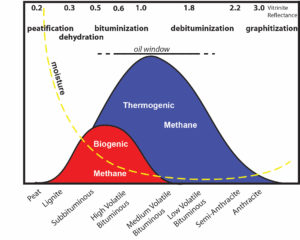 A figure from the paper.

The tone of the paper seemed to work. It has been cited in papers from other international research journals 780 times (as of 15 May 2020) and over the past few years, averages about 150 citations in journals per annum. What is also especially rewarding is to see other authors use some of my figures in their papers (one recently appeared in the AAPG Bulletin). I even ran into one of the figures in a legal document, and that was before they knew I was the expert on the opposing side. Sweet.

In an article by Luo et al. (2017)† I learned an interesting technique about information technology; a bonus was seeing my article in a visualization figure of most cited papers in Chinese CBM literature.

But I think, more importantly, a ton of people downloaded the article to read, and presumably learn from. It has remained in the top 25 downloaded papers of the journal for all the past 8 years – and it isn’t even an open source article!

In the past month, it has dropped out of that list for the first time, but during the first few years it was either number one or in the top five. It is hugely gratifying to know people found, and still find, it useful. 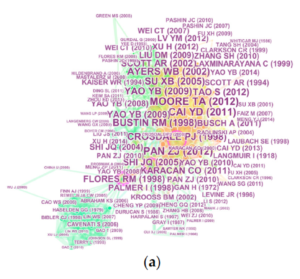 A figure about information assessment (from Luo et al., 2017)

I received a few personal emails from people I didn’t know, or only marginally knew. One of them from Andreas Busch (who is now a well known professor at Heriot-Watt University, Edinburgh, United Kingdom) in which he said (4 September 2012): “I glanced through your article that you just published … and must admit I am deeply impressed. Congratulations! This is a fantastic summary of coalbed methane and definitely a great addition to the literature not only for students or non-CBM specialized scientists and professionals. I definitely learned a lot again.” Thanks Andreas!

Finally, I should say the paper was successful because I had two excellent reviewers and a wise editor (Dr Özgen Karacan). The reviewers were anonymous at the time, but later both revealed themselves to me: Prof Joan Esterle and Dr Thomas Gentzis. The paper owes a lot to their inputs, as their suggestions trimmed a lot of unscientific digressions*** and helped to fan away the ‘fog of words*** in many sections.

**see the blog I wrote at the time after the paper was published: https://www.ciphercoal.com/coalbed-methane-a-review/

***though at the time I was bit grumpy about the suggested edits, now I see they were absolutely necessary.

****apologies to Joan Esterle who relayed this phrase to me recently on a totally unrelated matter and which I have just stolen it.