The speedboat skipped from wave to wave effortlessly; Tanjung Dewa was on our left and then it was gone. A head of us I could see the Senakin Peninsula, its dark forests tangled with cloud. The chill morning air made me smile.

My three colleagues, Mr Mike Friederich, Prof Hendra Amijaya and Dr Ferian Anggara, and I were being 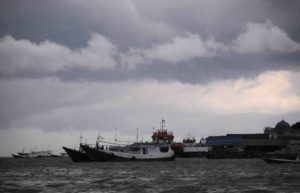 escorted by Pak Elino Febriadi of P.T. Arutmin Indonesia. Over the next few days we were to stay at the mine camp while we looked at the Eocene age Tanjung Formation. We didn’t have long in the field, so we had to be targeted. We knew what we wanted and Pak Elino and his team knew were to find it.

The Senakin Peninsula is located on the east coast of Borneo in the Indonesian province of Kalimantan Selatan. It’s a funny kind of peninsula, shaped like a football, connected to the mainland in the middle with the two pointy ends making for a kind of double ended peninsula.

Topographically, the center rises to low hills of over 200 m. It used to be dense jungle, but now is mostly secondary growth, some areas still thick with forest, but crisscrossed by roads, a result of forestry, mining, plantations and subsistence farming. 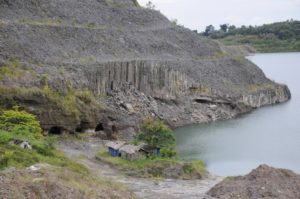 After stepping off the boat and onto the Peninsula things went fast. The drive, though lasting a while didn’t even register on me. Before I knew it, we were at the offices looking at maps then straight out into the field and then …. there it was: a beautifully exposed, columnar jointed outcrop of basalt. It stuck out like a textbook. It was spectacular. It seemed too easy.

To a geologist, going from core to outcrop is always an amazing journey. Though I had seen basalts from here in core, touching the outcrop was divine. We spent the day at this one location and sampled and described. The heat was foreboding but bearable.

The next day was no less fruitful. We had bagged the basalt and now we needed to find the volcaniclastics, if, indeed, they existed. I was still dubious and to sample these seemed too much good luck for such a short field trip.

But we did find them. And they were more than I had hoped. Over 7 m in thickness and at the right stratigraphic position predicted by the cross section, they turned out to be well behaved. Soft, variegated and pelitic with a sharp lower boundary they were no ordinary sedimentary rock – that was clear.

Under them were the typical Tanjung Formation mudstones with carbonate bands; and, still running high on our luck, marine fossils. That was fantastic.

It was a sunny day, which made the heat more than oppressive and by the time we had finished describing the section and sampling I was soaked and in serious need of rehydration. 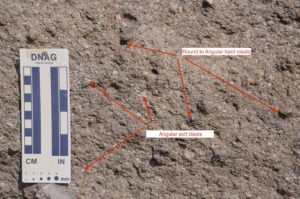 On the third day we started back; it would take all day to drive to the small landing, then take the speedboat, pass Tanjung Dewa once again and land on Pulau Laut. From there we’d take the small plane to Banjarmasin and finally a larger plane to Jakarta. We’d arrive late in the evening.

We had successfully completed the first part of this exploration – find outcrops and gather samples. Next would be analyzing them and writing up our results. That too has been completed – a first paper is out and we are now working on the geochemistry – for these, see the upcoming blog.