Vinegar, Noodles and Alice in the Triassic

If your idea of heaven is noodles, then when you die, you will come to Taiyuan. In case you didn’t know, the Shanxi Province in China is the noodle capital of the world and the capital of Shanxi is the city of Taiyuan (at least in terms of noodles). 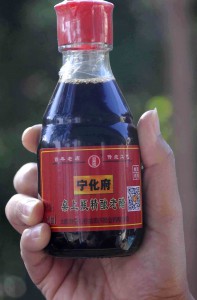 An example of some famous Shanxi vinegar.

Technology. I had been to Shanxi the year before for a tour of the Qinshui Basin, and this trip, like the last, gave me the opportunity to feast on noodles of all shapes, sizes and composition. Don’t even get me started on the jiaozi (dumplings). Also, one can’t talk about noodles and Shanxi without mentioning vinegar. It is often imbibed like an aperitif and of course used with a cornucopia of other foods to bring out and enhance flavors. Skeptical though I was at first, I’m a convert.

Aside from the noodles and workshop, I was also there to observe a particularly excellent outcrop of Triassic to Carboniferous sediments. My hosts, Professor Fangui Zeng and Dr Beilei Sun, spirited me away one morning and accompanied by two graduate students we headed west out of Taiyuan city and into the countryside.

The outcrop ran for about 3 kilometers along a dirt road with – somewhat surprisingly – not a single bit of traffic. There under the china blue skies of north China we walked hearing only the sounds of goats in the hills. The peacefulness probably had something to do with the building of some houses at the bottom (where we started) that blocked the road completely.

We began our journey into the past at about the Upper Triassic, or about 230 million years ago. The walking show was colorful with sandstones and mudstones of reds and whites and purples and greys all vying for our attention. This is a fairly famous outcrop so small centimeter diameter cores had been taken from various localities for geomagnetics and for absolute age dating (primarily using zircon). 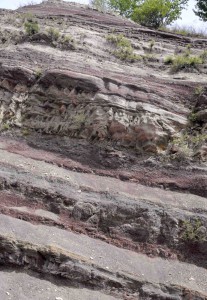 The mass extinction, which is thought to have occurred about 252 million years ago, saw 96% of all marine species and about 70% of all land species die out. Not good odds if you and your family were living back then! The cause is still hotly debated, for example see: Abu Hamad et al. (2012), Ogden and Sleep (2012) and Retallack et al. (1996).

A curious thing is that virtually no peats formed for many tens of millions of years after the event. The general feeling is that up to 95% of all peat forming plants at that time went extinct. What ever it was that caused this extinction, it was large and it was global. After a few million years the ancestors of the dinosaurs started to show up, though we saw none in our roadside show as most of the sediment appeared to be subaqueous channels and over bank deposits in what was thought to be an arid environment.

The actual Triassic-Permian boundary in this outcrop is hard to identify and, indeed, the age dating conducted by one of the PhD graduate students on our trip (Ms Chao Liu) suggested it lay a hundred or so meters deeper than expected in the section. Eventually we descended into two of the arguably most famous formations in China: the Permo-Carboniferous upper Shanxi and underlying Taiyuan Formations.

The coal beds in these formations, in this area, are anthracitic in rank (compliments to a local intrusive body) and average 1 -2 m in thickness. The obviously terrestrially-derived coals and sediments are interbedded with limestone. Many of the limestone beds are several meters in thickness and sometimes lie directly over a coal seam. They are interpreted as forming in a carbonate platform environment.

The intimate juxtaposition of very terrestrial sediments (coal) with very marine sediments (limestone) leads a geologist to ponder ‘curiouser and curiouser’ scenarios (apology to Lewis Carroll). Perhaps an explanation like the Pintail coal could be the answer (Moore and Shearer, 1993; Roehler, 1988)? Oh well, perhaps we need to, as the dormouse in Grace Slick’s song said: ‘feed our head’ a bit more (apologies this time to both Lewis Carroll and Jefferson Airplane).

Abu Hamad, A.M.B., Jasper, A., Uhl, D., 2012. The record of Triassic charcoal and other evidence for palaeo-wildfires: Signal for atmospheric oxygen levels, taphonomic biases or lack of fuel? International Journal of Coal Geology 96-97, 60-71.

Ogden, D.E., Sleep, N.H., 2012. Explosive eruption of coal and basalt and the end-Permian mass extinction. Proceedings of the National Academy of Science of the USA 109, 59-62.

← The Groom, the Mine, His Wife and Her Lake
NEW PAPER: Chemical Structure in Tectonically Deformed Coal →