WHY DOES INDONESIA HAVE SO MUCH COAL? – NEW PAPER OUT IN INTERNATIONAL JOURNAL OF COAL GEOLOGY 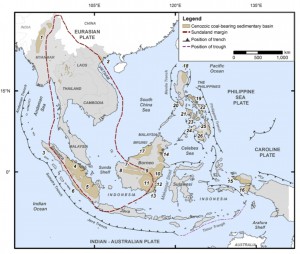 Why does Indonesia have so much coal? This might be like asking why is the sky blue? – but, like that question, it is fundamental and few seem to have considered it.

A new paper by Mike Friederich, Tim Moore and Romeo Flores (“A regional review and new insights into SE Asian Cenozoic coal-bearing sediments: Why does Indonesia have such extensive coal deposits?”) published in the International Journal of Coal Geology (http://dx.doi.org/10.1016/j.coal.2016.06.013) attempts to summarize the Cenozoic age coal-bearing basins in SE Asia and answer just that question. The three authors have well over 100 yrs of combined experience in SE Asia and they bring their exceptional depth of knowledge to the article.

In brief, the focus of the paper is Sundaland, a geological province that is made up of all or parts of the following countries: Myanmar, Thailand, Vietnam, Cambodia, Laos, Malaysia, Singapore, Brunei, the Philippines and Indonesia. This area is literally the southeast edge of Asia and it is underlain by continental crust of Mesozoic and older rocks, some emergent some submerged below a shallow sea.

The Cenozoic basins, for the most part, started forming during the Eocene as a result of rifting caused by the 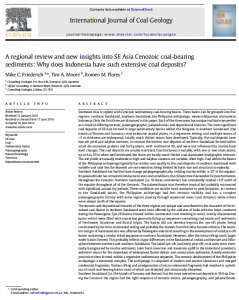 imminent crash of India with Asia. After this a general transgression appears to have taken place. Subsequently and into the Miocene, the basinal histories of different parts of Sundaland started to diverge. To a large part this was tectonically driven, but palaeogeographic and palaeoclimatic conditions also had a profound affect on where coal (i.e. peat) formed and where it didn’t.

Get the reprint, read the paper – its ‘in press’ at the moment (as of July 2016) but fully available as a download from the journal site (see link above) or as a reprint from the authors. Final volume and page numbers will happen before the end of the year; its part of a Special Issue of papers which were presented at the 2015 Annual Meeting of The Society for Organic Petrology, so everyone should also check out the companion papers in the same volume.