The Enigma of the Pinang Dome, Kalimantan (Borneo), Indonesia

by tim on May 31, 2013 in Commercial, Education, News, Uncategorized

It’s always surprising to be caught out by an assumption.

In this case I was writing a first draft of a paper on the effects of rank change (that is, change in organic maturation) on a coalbed methane reservoir. The study area, known locally as the Pinang Dome, is located in Kalimantan (Borneo), Indonesia. As I was writing the Introduction to the paper I casually made a statement about its well-known rank trends and put within parentheses “REF”, denoting I would have to look up those references later.

Unfortunately, when I did look up those references I found exactly – none! None that is which showed actual data of any kind that might demonstrate an increase, or even a lack of increase, in rank.  No doubt there are probably reports out there that have these data, but they lie beyond my reach.

Thus, as a side project to the paper being written, I decided to write an additional short paper (along with my co-author Chairul Nas) on what exactly is known and verifiable, about rank changes around the Pinang Dome and present it at the Indonesian Petroleum Association Conference in Jakarta in May 2013*. The presentation can be downloaded from this link: TAMoore 2013 IPA talk.pptx

After a bit of data mining, our basic conclusions were that:

On balance, the data seems to favor an igneous diapir as the origin of the Pinang Dome, though this is by no means, as yet, conclusive with the available data set. There may be additional data that can shed light on the origin of the Pinang Dome, though these data may be typically difficult, for this part of the world, to obtain. Future programs of exploration should strive to collect robust data on both temperature and rank changes down hole, which will help unlock organic and coal rank trends in this region of Kalimantan. 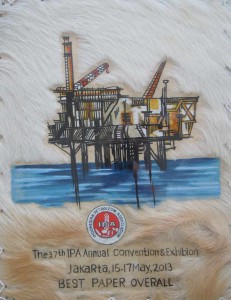 The presentation must have been convincing, as I was fortunate to be awarded the ‘Best Overall Paper’ for the conference. As there are over 4000 people registered for 150 or so talks, I am deeply honored to have received this distinction and my best regards and thanks go the committee.