The Groom, the Mine, His Wife and Her Lake

It was springtime in Xuzhou and the flowers were blossoming. Although not a small city by any measure – other than in China – the 8.5 million people seem a quieter type than elsewhere. Populated by parks, wide streets and relatively low buildings, the overall feeling one gets of Xuzhou is balance, politeness and a particular kind of serenity. Even the screeching military jets that sometimes punctuate the stillness only reinforce the pervasive calm by giving contrast.

I was in Xuzhou giving my ‘Coal and Coalbed Methane’ course to graduate students at the School of Mineral Resources and Geoscience, China University of Mining and Technology. As usual it was a very pleasant two weeks working with students in 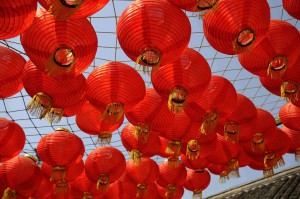 Chinese lanterns on a sunny morning, near Xuzhou.

the morning and giving the intensive course in the afternoon. Prof Simon Xu from the Department of Math and Computer Science at Algoma University, Sault Ste. Marie, Canada was also there giving a course in the morning and working in the afternoon with students. Prof Xu is a geologist by training but with a double doctorate, the second one being in, well, Big Data; its manipulation and interpretation. Big data processing is extremely relevant to geologists these days and it was good to know these students were getting a head start for their careers in this field.

Other than teaching and advising, we did manage to get out for a full day. The destination was an area where there has been substantial subsidence from an old, and large, underground coal mine. I’ve seen old mines turn into recreational areas before and they can be wonderful places for swimming, walking or quiet meditation.

Specifically I’m thinking of Lake Puketirini in the Waikato region of New Zealand (https://www.lernz.co.nz/research-themes/lakes/waikato-lakes-database/lake-puketirini-). It used to be part of a large open cast coal mine (‘Weavers Open cast coal mine’; see Newman et al., 1997 for a sketch of the old high wall and other cool scientific descriptions) but is now a splendid lake nestled in amongst the low hills of the Waikato (not too far from the movie location for The Shire in Peter Jackson’s ‘The Hobbit’ and ‘Lord of the Rings’). I was there when they officially opened the rehabilitated coal mine into a lake, complete with a visit by David Bellamy (https://en.wikipedia.org/wiki/David_Bellamy), whom I once danced with – but that is a story for another time.

Where we went in China, just north of Xuzhou, however, was even more spectacular. 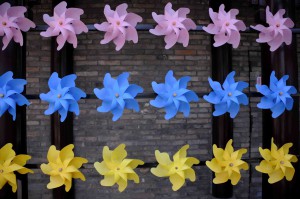 This was no mere lake and landscaping. This is a whole small tourist park erected on the side of this substantially large lake. The park is only a few years old but built using historic architecture (think Williamsburg, Va, in the USA or other cities in the same guise elsewhere in the world). This park had a bit of everything – shops, food, museum stalls, history panels and of course entertainment. I’d recommend it.

Built on the edge of the Panan Lake, the park has several connected waterways intertwined through the buildings. And that is how the entertainment is brought to you. In the warm late morning sun we positioned ourselves at a teahouse overlooking one of the channels. As the actors and singers positioned themselves a tier lower and diagonal to us across the water, a small boat, or skiff, was paddled languidly towards the scene. The boat held two main passengers: one bride, one groom. On the wharf waited the parents in-laws. Through the next 20 minutes we were treated to songs and dances depicting their wedding, complete with drama, comedy and life.

Overall, not a bad use for an old coal mine area.

← Musings of Micah on the Equator
Vinegar, Noodles and Alice in the Triassic →